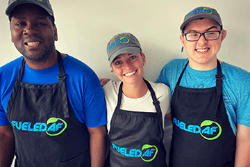 
One day during the pandemic, fitness entrepreneur Angelica Ford ’17 was leading exercises over Zoom for nearly 100 people with varied abilities at the same time. She was struck with a delicious idea.

The former dual major in fitness development and coaching minored in business at Cortland.

“And one day I said, ‘Hey, who wants a job?’ And everyone, that’s about 96 people, raised their hand. And I thought, ‘We have a population here that’s eager and willing to work and wants do these things. So that’s when Fueled by AF started.”

The business opened in June 2021 and today, following a six-week training course, Fueled by AF employees with a wide range of physical and mental abilities engage in rolling out, cutting and packaging the product at the company’s plant in The Hatchery, in Garfield, Illinois.

“In a five-hour work session, we produce 1,355 Protein Bites by hand; no machines,” Ford said, as she hand-rolled her product.

Ford’s model inclusive venture gained the attention of CBS Chicago, which broadcast her endeavor in a July 18 report titled: “Chicago entrepreneur, team focus on ability in the kitchen.”

“I’m Italian so I grew up around really good food,” said Ford, who holds two school records in swimming. “Like all good Italian treats, it started with a kitchen, one mixing bowl and an espresso maker.”

The Protein Bites are packaged in different size servings. Ford endorses bringing a three-pack to work with a mug of coffee for a healthy and satisfying mid-morning snack. Others might recommend the 12-pack, wrapped in cellophane and sporting an Italian flag banner. They’re available through her online Fueled by AF store and, more recently, at Chicago area coffee houses and farmer’s markets.

“There are no secrets here,” Ford said. Originally the company bought the plant-based protein mixture that is the basis for the snack from companies. Then Ford began to experiment with ingredients like pea protein, brown rice and chia seed to develop her own recipe. Recently the company began making its own line of nut butters as a separate product due to a supplier shortage of peanut butters.

It’s easy to forget that Fueled by AF is not the first business run by this promising entrepreneur.

People who use adaptive approaches to fitness has been a focus of Ability Fitness, her original venture, since it was created right before the pandemic. Ford, who had already had six years of experience as a personal trainer, designed her company to give access to high quality fitness coaching to individuals with a wide range of abilities in the comfort and safety of their own homes. Her venture has grown from just Ford to five additional employees.

During the pandemic, people of all abilities sought out her intensive style of one-on-one fitness mentoring, Ford explained. She’s still identified as ‘The Evil Trainer’ on the cellphone of one Cortland faculty member who retained her personal coaching services while she was a student.

“We’re kind people but we like to make everyone work,” she said of her personal training crew.

They work with clients focused on weight loss and injury prevention, help endurance athletes and provide inclusive services to people with disabilities.

“The best way to explain it is we’re a mobile fitness company, we can be anywhere you are at,” said Ford, a Chicago native. “We don’t have one location.”

In Chicago’s dense neighborhoods, where what would be a three-minute ride in Cortland could take 20 minutes, Ford’s original business has really taken off and she keeps adding employees.

“Convenience is something that people still want and need,” Ford said. Ability Fitness can do virtual training, but Ford feels that in-person training is the best.

Many individuals in the adaptive community have retained her services.

“If you can’t make it into a gym or fitness facility but you want to work out and you want to have a trainer and you want to have a healthier lifestyle, we can come to your home with equipment that we can set up in your home and a trainer that understands working with an individual in a wheelchair,” Ford said. “What this does is opens another door for you and gives you access to health and fitness services that you naturally wouldn’t have if you were trying to go to a gym.”

Last year, at the height of the pandemic when commercial gyms were closed and people sought physical distance from one another, Ford had quit her part-time job at a gym so she could ramp up her own startup helping people maximize their personal workout.

“With a service business, you start by training people,” she explained. “And that starts the business. A food business starts, but then you have to create packaging, and you have to get permits for kitchen space. It’s a little different process. We didn’t get the product ready to sell until June 2021.”

Her approach to staffing the two operations is also very different.

“In Ability Fitness, typically I have to go through one to 20 applicants and it takes considerable time,” she said. “For the food business, Fueled by AF, for hiring persons with a disability, they are vetted beforehand, they are in vocational school, there’s a facilitator who can tell me, ‘Yeah, this person would be the best fit for this business.’ They are excellent workers.”

While a student at Cortland, Ford captured two school records in the 200-yard individual medley and 400-yard individual medley and won SUNYAC’s Grace Mowatt Award. That award is given annually to a senior female swimmer based on career athletic and academic achievement and named after Cortland alumna Grace Mowatt ’59, M ’63, SUNY Oswego’s long-time women’s swimming and diving coach and a pioneer of women's swimming in the SUNYAC.

Ford credits her time on the swim team with fostering her success in school.

“Swimming was like the best choice I ever made when I went to school,” said Ford. “I think it’s what led me to be an entrepreneur and to the position I’m in today.”