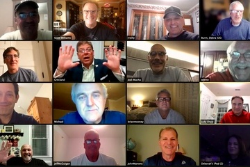 Just before 7:30 p.m. that night, Greg Vairo ’84 and Scott Williams ’82 started texting a small group of friends. They wanted to raise a toast to their beloved friend, the late Billy Pittorino ’85, on the two-year anniversary of his death.

That’s when Williams’ daughter Grace mentioned the videochat app Houseparty as an alternative to texting.

Within minutes, 10 SUNY Cortland alumni were sharing laughs, telling stories and reminiscing about Pittorino — and seeing each other’s reactions the whole time. The group loved the experience so much they didn’t stop.

For 60 consecutive Saturdays, former SUNY Cortland football players, brothers of the Beta Phi Epsilon (1927-1995) fraternity, friends, guests and Pittorino’s widow, Deborah, have joined together online to share memories. The weekly meetings routinely draw about a dozen members and a total of 35 in the rotating crew have joined in since the first meeting.

It’s become something more than a tribute to Pittorino as well. Early on in the COVID-19 pandemic, it helped those  quarantined at home stay connected with friends from around the country. The group meetings added deeply personal meaning to friendships that has already lasted four decades.

“It did reach a point after a few months of cracking the same jokes and telling the same stories where one of the guys came up with an idea to actually catch up with how we got where we got from Cortland to the present,” Williams said. “Every week one guy tells his story from graduation on.”

“It became a group therapy session,” Vairo said. “All of a sudden, something rings a bell with people and everybody starts opening up. I’ll be honest, I couldn’t believe some of the stuff I learned about these guys. It was a real metamorphosis. These are guys who we went to college with but never really knew. Everybody got really comfortable sharing things, even if it was dark.”

Pittorino, Vairo and Williams all knew each other as Beta brothers. Pittorino and Viaro had played football together and Williams was involved as public address announcer for games.

They regularly stayed in touch and met at Cortaca Jug games after graduation. When Pittorino was diagnosed with pancreatic cancer in 2014, Vairo and Williams helped orchestrate hospital visits from teammates and fraternity brothers from around the country.

Those bonds grew stronger after Pittorino passed away.

“His funeral was something to behold,” Vairo said. “Everybody came in from everywhere, guys came that we hadn’t seen for years. Everyone showed up. Toward the end of the funeral, we sang our fraternity song in front of his casket. People had never seen things like that. That reconnected us like never before.”

Deborah Pittorino has created the Bill Pittorino ’85 Humanitarian Scholarship to honor his memory by providing support, both financially and through mentorship from his friends, to SUNY Cortland students who embody his generosity and toughness.

Vairo and Williams have kept his memory and his spirit alive during the weekly sessions.

The group meetings finally took a pause on the Saturday before Memorial Day 2021. Many, however, couldn’t resist a text or two.

“Everybody kept on texting each other because they didn’t know what to do with themselves,” Vairo laughed. “What are you doing today?”

The meetings, which ultimately shifted to Zoom after the crowd grew too big for Houseparty, will continue on the first Saturday of each month for the time being as life starts to return to normal after COVID-19.

But this group of friends does have a big weekend planned for this fall, when they’ll come back and watch the Red Dragons play Utica College on Oct. 23.

Williams’ wife, Catherine Curry-Williams, has noted how her friends are amazed by how dedicated her husband has been to these Saturday sessions. A writer and executive producer for “NCIS,” Williams lives in Los Angeles, making his start time at 4 p.m. Pacific a bit more challenging. So far, he’s missed just one for his daughter’s birthday.

“Everybody says to me, ‘Wow, you are so lucky that your husband has such good friends,’” Curry-Williams said. “Men don’t have close groups of friends. I’m very grateful that he does. It’s wonderful to see. I’m part of a lot of women’s groups and that they have this is rare.

“It’s really moving. It’s so authentic that they’re having these conversations with each other. It’s really special. That’s why it’s nothing I can complain about. Saturday night? No, he couldn’t be doing anything better than bonding with his friends.”

Vairo, a certified health coach and personal trainer, has had similar experiences in his conversations with clients. He urges other Cortland alumni to start their own regular virtual meetings and reconnect with old college friends.

“People should just do it,” he said. “Somebody has to make a move. Most people are hesitant to do something like this but it’s just a matter of taking that first step.

“I talk to people and they ask, ‘You’re still doing that Zoom? For a year, really?’ Then they became in awe of it. They’re jealous of this. They can’t believe it. I can’t believe it either. Something as simple as a toast on an anniversary turned into this.”

When Williams addressed the Class of 2017 at Commencement as an honorary degree recipient, he told the graduates that there’s nothing like old friends. He meant it. He put it into practice. And during a turbulent year, a group of old friends were lucky to have had each other to lean on.

“Work Zooms might be a drag, but I don’t know anybody who has come out of a Zoom with friends going, ‘That sucked,’ Williams said. “Everybody comes out of these Zooms feeling that it was fun. You’re seeing guys you haven’t seen in a million years.”