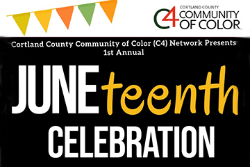 The Cortland County Community of Color (C4) network, a collaborative initiative between the two SUNY campuses, will host the official recognition of Black American emancipation from 6 to 8 p.m. in Courthouse Park, Cortland.

Juneteenth, which combines the word “June” with “nineteenth,” was declared an official holiday in many states, including New York last year, to mark June 19, 1865.

For many African Americans, the historic day fell more than two years after Abraham Lincoln had decreed that all Americans are free through his Emancipation Proclamation.

“It took a full two-and-a-half years for the enslaved people in Galveston, Texas, to learn they were freed by the signing of the Emancipation Proclamation,” she said.

The free event will feature music, giveaways and refreshments. The celebration will take place rain or shine. In addition to presentations by the co-sponsoring colleges and the city, the gathering will feature entertainment provided by FunFlicks Indoor & Outdoor Movies, owned by SUNY Cortland alumnus Timothy Bennett ’07.

Stafford, who serves on the C4 committee, said the group has discussed holding this event for the past two years.

“We did have a Virtual Juneteenth event last year, but we wanted to have something annually in person,” she said. “We are excited to host this event as C4 and get support from the City of Cortland.”

C4’s goal is to spread more awareness about the meaning of Juneteenth, Stafford said.

“We realize that many do not know the history and we want to continue to educate the community and celebrate freedom together,” she said. “Everyone is welcome to come check out our event.”

“Jarvis Givens, an historian and faculty at the Harvard Graduate School of Education, has researched that New York state announced a formal Freedom Day celebration on July 4, 1827,” Bitterbaum said. “This became a celebration that Black people engaged in. However, they celebrated it on the 5th so that it might have its own day and serve as a critique of July 4th.”

“It makes me proud that SUNY Cortland is taking the initiative to make this event happen," Lopez-Janove said.