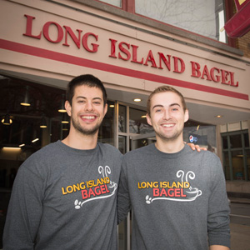 
The inspiration for downtown Cortland’s newest booming business was born inside of a SUNY Cortland residence hall several years ago, from an age-old debate pitting the merits of upstate New York against downstate.

Paul Mangiamele ’14, then a freshman from Pittsford, N.Y., went back and forth with his Bishop Hall neighbors, who were Long Island natives. They jokingly argued about the quality of pizza and common phrases from their hometowns. Each side claimed superiority.

“I thought a bagel was a bagel, no matter where you went,” Mangiamele said. “I had no idea what a Long Island bagel was.”

Four years later, the downstate product serves as the namesake of the Main Street restaurant Mangiamele opened in October with a childhood friend. But Long Island Bagel might never have opened its doors without the training of a SUNY Cortland business economics course focused on entrepreneurship.

“The class really helped develop a business plan,” Mangiamele said. “And the College played a huge role, providing the opportunity to make a former student realize this is possible.”

Located at the corner of Main Street and Central Avenue — the former home of Mando Books — Long Island Bagel hosted a constant stream of customers during its first month of operation. The line often stretched to the door and it rarely disappeared completely.

“Our projections said we were going to do 160 customers a day during our first week,” Mangiamele said. “And we tripled that.”

A grand opening saw 400-plus customers walk through the door followed by nearly 500 the next day. More than 8,000 Long Island bagels were sold during the first week, which prompted two emergency trips downstate for more dough.

That’s because the Cortland business relies on an authentic product. A Long Island distributor kettle boils and ships the dough to Central New York, where the bagels then are baked in-house.

“This bagel, it’s cooked differently than what you’re used to upstate,” Mangiamele said. “And people from Long Island have confirmed: this is a genuine Long Island bagel.”

Approximately 45 percent of the College’s first-year class hails from Long Island. So to win the approval of natives is impressive considering Mangiamele and co-owner Sam Braine grew up near Rochester, N.Y. — a seven-hour car ride from Long Island.

At a young age, the best friends dreamed of one day becoming business partners. They kept a notebook in high school with all of their ideas for services and inventions. They also worked together at the same high-end restaurant in Pittsford.

Braine went on to the University at Buffalo and Mangiamele came to Cortland, originally thinking he would wind up in the medical field. The goal to launch their own business stayed in the back of their minds through college. Then in the fall of 2013, Mangiamele took the first of two entrepreneurship courses taught by Brian Ward, a SUNY lecturer of economics.

“The purpose of the class is to learn how to take an idea and turn it into a business,” Mangiamele said. “For Sam and I, it’s always been, ‘We want to start our own business. Now what?’”

Many students tackle SUNY Cortland’s entrepreneurship course purely as an academic exercise, although some come in with a specific goal to start a business, Ward said. Students are tasked with generating several business ideas at the outset and then boiling them down to a handful that small groups can rally around.

Then the work begins.

“They have to do real research to show that a business idea is viable,” said Ward, the former chief executive officer of Cortland Line Company, a fishing equipment manufacturer, and a business executive with the American Dairy Association. “Sometimes the research shows that it isn’t, and that can be just as valuable.

Mangiamele told his classmates he wanted to be the person to deliver Long Island bagels to Central New York. He convinced a handful to join his team and they started on market research.

“Really, your idea has to transform based on what the market tells you,” Mangiamele said.

The classmates learned early on that the bagel idea didn’t require many wholesale changes. They set up a blind taste test “against some pretty stiff competition,” Mangiamele said. It included national chains and local shops. The bagels — plain across the board — were served without being toasted and included the option of cream cheese.

The winner was clear: 85 percent of the taste testers preferred the Long Island Bagel product.

“If you have proof of concept — if you can prove something is a good idea — you can go on with it,” Mangiamele said.

He opted to take the second entrepreneurship course, which is formatted more like an independent study and involves acting on the pre-requisite’s business plan. Other classmates stayed on with Mangiamele for the academic exercise but slowly dropped off as he became more interested in bringing the bagel idea to life.

Still, his childhood friend Braine was all in and Ward was willing to act as business mentor in addition to professor. Groups like the Cortland County Business Development Corporation and the Cortland Downtown Partnership also offered support.

When it came to financing their restaurant, they were helped by $2,500 in concept testing funds from an Appalachian Regional Commission Grant. The two young college grads also poured in their own money and relied on a bank loan.

“We learned quickly that if you have a good business idea, the money will come,” Mangiamele said. “It was amazing to me that a 22- and a 23-year-old could go to the bank with very minimal collateral and come out with something.

“Good planning was the key, and the course provided us with that.”

Still, their success has not come without speed bumps or stress.

Finding the right location took patience, and the construction required to turn a longtime bookstore into a grab-and-go restaurant spanned 11 weeks. Early demand indicated the wait was worth it and then some.

During the first month, Ward has visited the bagel shop regularly to sip coffee and advise his former student. He watched during the opening week as the line snaked out the door, with some first-time visitors stepping out and thinking to come back at a less busy time.

There still are some expected early wrinkles to iron out, Ward said. They include aligning demand with adequate staff and sensible hours of operation, as well as perfecting an already diverse menu. Currently, Long Island Bagel is open from 7 a.m. to 3 p.m. seven days a week. The schedule likely will expand to include late-night weekend hours in the future.

“(Ward) is still involved because he has a plethora of advice and business experience,” Mangiamele said. “His whole reason for teaching is to bring the real world into the classroom.

“In a way, this is bringing the classroom into the real world.”

Long Island Bagel aspires to be something more than just a breakfast and coffee joint, Mangiamele said. It’s why he and Braine brought on their longtime friend and former restaurant co-worker Joe Harzynski to craft a unique menu and serve as the shop’s general manager.

The result so far has included lunch offerings that rely on Boar’s Head deli meat and have proven as popular as the establishment’s breakfast options. Then there’s the create-your-own cream cheese concept that Long Island Bagel has introduced, which invites customers to customize the exact ingredients in their spread.

“Think Coldstone, but with cream cheese,” Mangiamele said, referring to the popular ice cream chain. “The class reinforced the importance of being unique with your product, and this is just another thing that accomplishes that for us.”

It’s almost as unique as two young 20-somethings — just months removed from their college graduations — having the courage and smarts to start up a successful business in a re-energized downtown.

“When someone says, ‘Wow, your food was really good,’ or ‘Wow, your restaurant looks really nice,’ that’s satisfying,” Mangiamele said. “And to know that you created it yourself, even if it’s built around something as simple as a bagel, that’s even better.”