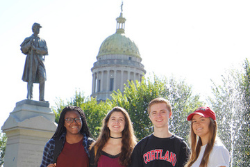 
The location where college graduates decide to settle can make all the difference in how they live, work and play. According to a recent study, Cortland, N.Y., is a prime spot for young people to start their post-college lives.

OnlineDegrees.com looked at 413 U.S. cities with a population of 150,000 or fewer people, examining median monthly rent, median earnings for those with a bachelor’s degree, percentage of residents aged 20-34 and the arts and entertainment venues in each location. Cortland ranked No. 8 on that list, the highest-ranking city in the Northeast.

Cortland was lauded for its affordable housing, good job prospects and relative proximity to New York City. The area has a commitment to research and development was cited as a factor that may provide career paths for SUNY Cortland graduates. A variety of cultural events for all four seasons also was named as part of the Cortland-area appeal, from festivals and fairs to golfing and skiing to arts and cultural events.

OnlineDegrees.com, which primarily provides information on online degree programs, also compiles information relevant to students and graduates, such as its best cities studies. The methodology for its “Best Small Cities for New Grads 2018” report used a 10-point scale that factored in housing data, demographics, growth and employment projections and the density of cultural and historical sites in each of the 413 cities it studied.

Earlier this year, Safewise, a home security research company, placed Cortland on its list of the 30 safest College Towns in America. Cortland, which placed at No. 20, was the only community in New York state to make Safewise’s rankings.

The College has committed to the Cortland community by offering eligible employees up to $4,000 to spend toward the down payment or closing costs of a home located in the city as part of its SUNY Cortland Neighborhood Homeownership Program.

Recently, Gov. Andrew Cuomo and the state of New York endorsed Cortland’s potential by awarding the city a $10 million grant to revitalize its downtown.