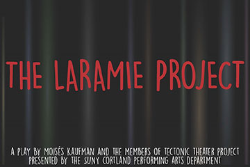 Afterward, a scrum of national news media commentators descended upon small Laramie, Wyo., as the nation raked over the “hate crime” aspects of the killing and the lack of appropriate laws in Wyoming and other states.

Laramie also was visited by Moisés Kaufman and members of the Tectonic Theater Project. The theater company drew on hundreds of interviews with inhabitants of the town, company members’ own journal entries, and published news reports to create a unique 2000 play, “The Laramie Project.”

The controversial drama about the small community’s reaction to the national spotlight has been produced worldwide. Later this month, it will be in Cortland.

In the play, eight actors portray more than 60 residents of Laramie as they discuss, reflect upon and try to make sense of the 1998 murder of one of their own.

Presented for the first time by the College’s Performing Arts Department, “The Laramie Project” will be staged at 8 p.m. Thursday, Friday and Saturday, Oct. 20 to 22, and at 2 p.m. Sunday, Oct. 23.

Admission is $9 for students, $16 for faculty and staff members and senior citizens and $19 for the general public. Tickets may now be purchased online at cortland.edu/boxoffice or at the box office starting one hour before the play.

Two special events are scheduled in connection with the drama.

A vigil will be held in remembrance of Matthew Shepard at 8 p.m. Wednesday, Oct. 12, in the quad outside of Dowd Fine Arts Center. Shepard lost his life on Oct. 12, 1998.

Additionally, the SUNY Cortland production’s creative team and special guests will participate in a panel discussion immediately following the performance on Friday, Oct. 21. The panel will focus on perspectives from the LGBTQ community, analysis of the legal aspects and legislative fallout from the case, as well as questions and answers about the production itself.

“The reason to produce a play so socially relevant is to perpetuate a conversation,” said Jeffrey Whetstone, who joined the College this fall as production manager and publicity coordinator.

“What were the attitudes and what was the culture in 1998? How far have we come? How much further do we need to go? These are the questions we hope the audience will ask themselves in the car on the way home from the theater and with colleagues the next day. I like that this play poses the questions and gives the audience an opportunity to consider their answers.”

Scott Holdredge, who joined the faculty this fall as an assistant professor, will provide his first scenic design for a SUNY Cortland production.

“This is the first time a student has designed costumes for a main stage production,” Reynolds said.

Rayo has served as a work study student in the costume shop, assisting the designers of past productions of “Rocky Horror Show,” “The Nutcracker,” “Brigadoon” and “Sunday in the Park with George.”

“We are more than confident in Kevin’s eye for design and very proud to see him take the next step in his journey as a well-rounded theatre artist,” Reynolds said.

“I think it’s a really important part of an actor’s education to learn about all aspects of production, not just performing but stage management, directing and design,” Henningsen said. “This has been an eye-opening experience, and it has already helped me with my acting work in class.”

Cast members are easing into their many roles for this production.

“Rehearsing this show requires so much specificity,” actor Noonan said. “You have to tap into your own life experiences to access the raw emotions that are true to the material, true to yourself and true to the audience.”

“This is my first dramatic role,” Enders noted. “It’s a refreshing change to work on material that is so emotionally charged.”