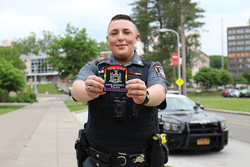 During the month of June, however, they and law enforcement officers across SUNY are encouraged to don a newly created official rainbow patch to identify themselves as firm allies during LGBTQIA+ Pride Month.

Red Dragons have a special reason to boast about the creation of these embroidered uniform badges: SUNY Cortland University Police Department people made it happen.

“This month, in conjunction with the Chancellor’s Office, a uniform shoulder patch in support of LGBTQIA+ Pride Month will be allowed to be displayed on the uniform, if the department so desires,” Ritayik said in a May 9 memo to university police chiefs.

Moreover, Salisbury has been collecting $5 from anyone who wants to purchase a patch with all proceeds going to Point Foundation, a 20-year-old organization that aims to empower promising lesbian, gay, bisexual, transgender and queer students to achieve their full academic and leadership potential — despite the obstacles often put before them — to make a significant impact on society.

“It’s one of the largest nationwide nonprofits to benefit LGBTQ, college-aspiring youth, and offer mentorship in terms of their education and community service,” Salisbury said. “They also fund scholarships for aspiring LGBTQ youth.”

Salisbury said it all began as a mission in partnership with Officer Jennilee Valentin to foster greater ties between the UPD and the campus, Cortland and statewide LGBTQ+ community by attending conferences and gatherings of groups including SPECTRUM and the TransAction Conference on campus and the Cortland LGBTQ Center in the local community. SUNY Cortland’s resources for students and employees include: The Center for Gender and Intercultural Studies, Pride Club, SafeZone training and The Sexual Orientation, Gender Identity and Expression (SOGIE) Committee.

“I absolutely love art and design, and I wondered if State University of New York has ever had a pride patch,” Salisbury said. “I contacted a few people, including my chief, who’s been here over 30 years, and I asked, ‘Has this ever been done?’ And every answer I got was ‘No, I don’t believe we’ve ever had one.’

“As bad as that can be, it’s good for us,” Salisbury said. “It’s progress. It’s something we can do. So I kind of took my idea and ran with it.”

Salisbury’s essential design was to preserve intact the SUNY University Police badge within a rainbow of colors. After close collaboration with the patch designing company, this was achieved exactly a year ago.

Salisbury ordered a shipment to campus even though she didn’t know if the state would approve of her idea.

“I really wanted to do the patch,” Salisbury said. “I still was motivated even if it was just for nothing more than local representation and to raise awareness and to raise some money for the Point Foundation.”

Her next task was working with Chief DePaull to pass the initiative up through the UPD chain of command to see if SUNY would adopt it for statewide use.

“The chief has been 100 percent behind this initiative from the get-go,” Salisbury said. “He spoke to the commissioner of the university police, and took the patch to the State of New York Police Chief’s Conference.”

It probably helped that the commissioner is a Red Dragon, too.

As for Salisbury, she sent one of her own uniform shirts to a tailor to have the standard University Police patch replaced with the one she helped bring about.

“So I have a specific shirt with my pride patch and it will remain that way every year from now on for the month of June,” Salisbury said.

That’s a good thing for Salisbury. Because the orders have been flying in and she’s already running out of the first batch of 251 police pride patches. She’s ordering 251 more. The patches may be obtained from Salisbury and she will gladly arrange for shipping if necessary.