Future teacher is beating the odds 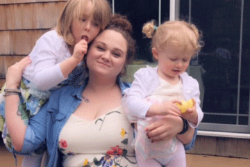 
Relative poverty and lack of opportunities has set the bar low for children in rural Dunbar, West Virginia.

“Most of the people I grew up with went to school because you had to,” recalled Allison McDaniel, a senior inclusive education major at SUNY Cortland who is concentrating in social sciences.

“When you were in the eighth grade or 16 you just dropped out. It was almost encouraged,” said McDaniel, whose two older brothers quit school early, about her labor-oriented hometown, a community of some 7,000 residents in West-central West Virginia.

Yet people were shocked when McDaniel ended her education in the 11th grade at 16, a few weeks after she was elected as class president at the high school in a neighboring, larger city, but before she had attended a single student council meeting.

“No matter what my home situation was, I was someone who always thrived in school,” said McDaniel.

“My mom had been in and out of prison,” McDaniel said. “I had to work. I didn’t even get my GED for a while. I had to support myself to some extent, as much as l loved the socialization. In that world I grew up in, it was unrealistic to believe that school was going to lead me to anything. I lived from day to day.”

Today McDaniel of Endicott, N.Y., now 28 and raising two children of her own, is on track to earn her bachelor’s degree in May 2022 with dual certification in inclusive and special education.

Her children’s grandmother is helping out with childcare, enabling her to focus on studies. McDaniel has earned a 3.68 grade point average and recently was inducted into the Tau Sigma national honor society for transfer students. SUNY Cortland has supported her studies for 2021-22 by awarding her the Angela Pace, Spina-Friedgen ’71, Ethel Mahan Theisen ’55 and Rosemary Walters ’58 scholarships.

As one of SUNY Cortland’s approximately 300 non-traditional students, McDaniel doesn’t mind standing out a bit in age from her classmates, knowing the almost insurmountable odds she beat to get where she is today.

“I think I would have been much more ahead in my education and my goals if I had had someone who made me feel safe and comfortable to continue my education,” she said.

“I would like to offer support and help that a lot of students don’t get, and a lot of educators think doesn’t matter,” McDaniel said of her outlook as a future teacher after she completes courses next fall and her student teaching assignment in Spring 2022. “I think it’s important for educators to know that their students have social, emotional needs that must be met.”

For most of the 12 years between age 16 and now, she made little progress.

“I bounced around with friends, I just survived,” she said. At 19, she moved back in with her mother, who urged her to complete her GED.

“I felt unfulfilled because I couldn’t finish,” said McDaniel, who heeded her parent’s advice. “I showed up and tested all day. I enjoy testing, organizing my thoughts and what I know and what I don’t know. I realized I missed school and having that intellectual challenge.”

A few weeks later, the Governor’s Office affirmed her GED completion and disclosed the exciting news that her stellar test score had won her a free year of higher education through a special program in West Virginia.

“I kind of hem-hawed on it for a while,” McDaniel said. “Then I decided, if I was going to go for free, I was just going to go and enjoy myself. I mean, people die for 50 grand where I come from.”

By choosing West Virginia University, she put more than three hours’ driving distance between herself and Dunbar.

“It was like night and day from where I’d come from and I’d never experienced that: being in a place where everyone’s goal was to be better,” McDaniel said of her year taking fun liberal arts courses. “No one had to be there, and nobody was trying to make it difficult for everyone. It kind of filled this void I had. I went for my first year and I did great, I loved it.”

But McDaniel’s early life experiences have caused her to exhibit an exaggerated startle response, even in the classroom where she feels most comfortable.

After her year at West Virginia University was over, McDaniel worked until her first child was born, when she found herself in a government office seeking assistance from a solicitous bureaucrat.

“Her job was to help me get food stamps, but this very nice lady connected me to the right resources, and I was able to slowly take one or two classes while I was raising my baby at home,” McDaniel said.

Tragedy struck her life when she was 24 and her mother, still struggling with addiction, was killed by a home intruder, along with McDaniel’s stepfather and the family dog. The police case is unsolved.

“The aftermath made me decide that I need to help people before they get to this point,” McDaniel said. “How many unmet needs were there for my mother before she got to this point, to be silently harmed until she was killed?

“I would like to be teaching children applying that same mentality,” she said. “To be in a safe and secure setting, education will naturally come, because everyone wants it.”

The family of her children’s father in the Binghamton area then reached out to her in the wake of her trauma, although her former boyfriend has moved on.

“Now we’re just friends. He’s getting married in September,” McDaniel said. His future wife is kind to McDaniel’s children and offers them treats she’d never think of. “They get the benefit of three parents, four really, with their grandma.”

“We’re a united front in raising these children,” McDaniel said.

She hopes to pay it forward in her future classroom.

“It’s why I take inclusive childhood education,” McDaniel said. “It’s because students don’t learn when human needs aren’t being met. When students are confused, struggling with mental illness, it doesn’t matter how much they want to learn, something is not giving them that opportunity to decide. It’s deciding for them. This is an opportunity for me to create equity in the classroom.”

McDaniel is being honored along with other classmates during the university's Non-traditional Students Week, which also features events from April 12 to 16.

Nominations should include the student’s name, contact information, relationship to the student and comments about the non-traditional student. Comments will be listed on the certificate, unless otherwise noted. To nominate a fellow student, fill out the nomination form.