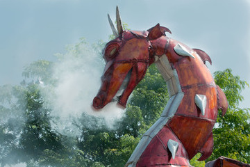 
It sounded like the crowd at a Fourth of July fireworks show.

When the tarp-covered scaffolding was pulled away and a massive, smoke-breathing Red Dragon sculpture was unveiled in front of the Stadium Complex on Sept. 16, the assembled students and alumni could barely believe their eyes. The Red Dragon pride that the members of the SUNY Cortland family feel each day now had been given physical form and a permanent home on campus.

The unveiling, one of the highlights of Red Dragon Homecoming Weekend 2017, was made possible by the efforts of SUNY Cortland alumni.

Mike Vela ‘88, a former SUNY Cortland student-athlete on the football field, made a generous donation to make the sculpture happen. Scott Oldfield ‘06, who serves as a lecturer in the College’s Art and Art History Department and is the preparator for Dowd Gallery exhibits, sculpted the Red Dragon from stainless steel, a process that took six months of round-the-clock work.

A plaque in front of the sculpture bears the following inscription:

“Home of the Red Dragons. Donated by Michael A. Vela ‘88 and family. In honor of all athletes who bleed Cortland Red. One team, one family.”

“It’s my honor to pay it forward,” Vela said in remarks before the unveiling. “Every vehicle I drive has a Cortland plate on it. I’m very proud to be a Red Dragon and I hope you all feel the same way. Encourage others to come. Pay it forward. When you have an opportunity to, make sure you pay things forward.”

Vice President for Institutional Advancement Peter Perkins thanked senior gift officer Rich Coyne ‘07 for his efforts in working with Vela to make the sculpture a reality. Perkins also noted the hard work of the College’s facilities team, which installed the concrete base and did the electric wiring that powers the smoke-breathing mechanism.

President Erik J. Bitterbaum shared a story about a trip he took to Qufu Normal University in China in 2015. Luo Xu, professor of history, and Shufang Shi Strause, associate professor of childhood/early childhood education, joined Bitterbaum on the trip to help translate with Chinese officials as the College pursued further partnerships in China.

When Xu and Strause explained the College’s mascot to their Chinese counterparts, a buzz went through the room. And when they asked Bitterbaum’s year of birth -- 1952, the year of the dragon -- well, it was kismet.

Bitterbaum anticipates that the Red Dragon sculpture will build bridges between cultures and also serve as an iconic location on campus for generations to come.

“If you were born in the year of the dragon, you’re going to have good luck all of your life,” Bitterbaum said. “I can’t wait until our Chinese guests come here because I realize they’ll want their photo taken in front of this. Moving forward, there won’t be a Cortland grad who doesn’t come down here during graduation week and get their picture taken.”

Director of Athletics Mike Urtz ‘94, M’99 instantly picked up on the symbolic nature of the Red Dragon sculpture when he watched the top-secret installation on Wednesday evening. He noted its sense of strength, distinctiveness and consistency.

“Finally, when I see it, I see humility,” Urtz said. “As a Cortland alum and for those who came before my time and for those who are here now, we take great pride in doing our business the right way and that’s to represent our families and our university with pride and distinction. Part of that is being humble and being a good citizen.”

Aristotle Arkayasa, a SUNY Cortland senior and president of the Student Government Association, urged his classmates to rely on their inner Red Dragon pride as they navigate through classes and the world beyond Commencement.

“It’s so special because we all get to witness history as we unveil this magnificent statue,” Arkayasa said. “Its purpose may serve as a reminder to our Cortland family that as a Red Dragon, your life may not always be smooth. It’ll have its rougher and more rigid sides but you will always remain strong and supported by your experiences here at Cortland.”

Immediately following the unveiling, students and alumni gathered on the Stadium White field to celebrate the College’s sesquicentennial. SUNY Cortland, which was founded in 1868, celebrates its 150th anniversary next year. Participants formed a giant “150” on the field and posed for a historic photograph.

SUNY Cortland students streamed into the Stadium Complex after the unveiling, many stopping in front of the sculpture to take selfies destined for sharing on social media.

“It brings people to the games,” said sophomore athletic training major Kenny Connolly of Westchester County. “It’s a big symbol of who we are as Red Dragons.”

As for that Cortland Pride? Well, students, alumni and faculty and staff were all feeling it. Just ask sophomore kinesiology major Tristan Moreno of Clarkstown, N.Y.

“I think it’s cool that alumni are giving back to the school after graduating,” he said.