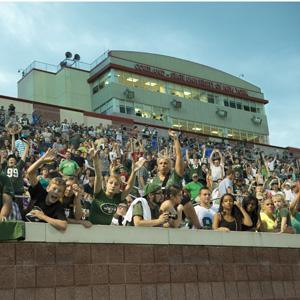 
Economic activity related to the New York Jets’ 2014 Training Camp at SUNY Cortland topped $4.6 million in Cortland County this past summer, according to a study published by two College faculty members.

That’s nearly $1 million more than the economic impact of the 2013 camp. In all, the five New York Jets training camps hosted at SUNY Cortland have resulted in $23.84 million in economic activity for Cortland County since 2009.

“I always look forward to reading this report because it brings a bit of good news for the entire Cortland community,” said College President Erik J. Bitterbaum. “The economic boost, the added exposure and the excitement that training camp creates all are undeniable.”

More than 22,500 spectators from 34 states and five countries passed through the training camp gates in 2014, up from 21,240 fans in 2013. They contributed upwards of $2.1 million in direct spending ? roughly half a million dollars more than they spent the previous summer. As that money circulated through the community, its impact reached $3.8 million, accounting for the majority of the 2014 economic activity.

Prepared by SUNY Cortland Professor of Economics Kathleen Burke and Associate Professor of Geography Wendy Miller, the 2014 report reflected the significance of training camp visitors dining in restaurants, shopping in stores and refueling at gas stations during a three-week span this summer. The Jets held 15 public practices between July 24 and Aug. 13.

Highlights from the 2014 report include:

Survey data is based on responses from 9,291 people. The final report also highlighted some of the added value that comes with training camp, in addition to dollars injected into the local economy.

“The presence of an NFL team at SUNY Cortland, making the small city of Cortland its home for a summer training camp, again yielded national media coverage for our community,” the report reads. “The intense coverage, by all types of media of every aspect of the Jets’ team during August 2014, placed SUNY Cortland in the headlines almost daily.”

One of the 2014 coverage highlights featured the team’s inclusion of the College and the community in its ALS ice bucket challenge video, which circulated nationally.

The benefits that the College receives as the official university partner of the New York Jets also were noted. Those include more than 50 student internships as well as two open houses for prospective students and high school guidance counselors held at the team’s facilities in New Jersey.

“Internships afford our students with experiences that they would never have at another institution,” the report suggests.

The report also mentions the quality of SUNY Cortland’s athletic facilities and the benefits they bring throughout the year.

“The continued partnership with the New York Jets has led to our use of two NFL quality fields, which benefit not only the College but the Cortland community as well,” the report reads. “These improvements enhance the ability of the Cortland Regional Sports Council to market the campus to sport camps and other athletic events that are considering coming to Central New York.”