Spy-Turned-Commentator to Speak on Russian Hacking 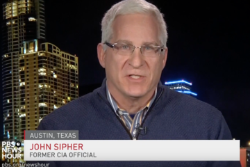 
John Sipher is an international expert on all things espionage, particularly on the topic of Russian interference in the 2016 U.S. election.

He also is a Cortland native with ties to SUNY Cortland.

Sipher will return to the SUNY Cortland campus Tuesday, Oct. 30, to deliver a talk, “Their Spies — Our Spies — Russian Hacking of U.S. Elections and Politics.”

The event, at 4:30 p.m. in Sperry Center, Room 104, is free and open to the public. The talk is co-sponsored by the Political Science and History departments, the Clark Center for Global Engagement and the President’s Office.

After a 28-year career in the Central Intelligence Agency’s National Clandestine Service, Sipher has become a familiar and respected voice on television news shows like CNN, MSNBC, BBC and PBS NewsHour, and has written articles that were published in The New York Times, The Atlantic, Politico, Foreign Affairs, Newsweek and Slate, among others.

His interest in world events echoes that of his father, the late Roger E. Sipher, a SUNY Distinguished Teaching Professor of history. Roger Sipher taught at SUNY Cortland for 43 years and helped train generations of social studies teachers.

“The College was really important to me growing up,” Sipher said. “I was born in Syracuse but we moved there when I was really young. We used to live right near the College, so even as a kid I was running around and playing there.

“This is kind of a homecoming for me.”

The aptly named Sipher — pronounced the same as “cipher,” which means a coded message — served multiple overseas tours for the CIA as station chief and deputy station chief in Europe, Asia and other high-threat environments, including a post in Moscow. His historical knowledge of Soviet-era measures to manipulate foreign media inform his understanding of current Russian tactics. A study of past spycraft methods may help the U.S. defend itself against future attacks, Sipher argues.

“The 2016 election was different for a lot of reasons, but it wasn’t different in that the Russians and the Soviets before them were focused on these active measures and subversion and sowing chaos,” he said. “I’m trying to show that there is a long historical connection to this. So if you’re trying to figure out what’s going on, looking at it through a historical lens is a valuable way to look at it.”

Russian interference in the 2016 U.S. election primarily involved targeting Americans via false or misleading news stories posted on social media. In his talk, Sipher will discuss how Russian meddling is more than a domestic political issue. The Kremlin’s goal in 2016 was to turn the political factions of the U.S. against each other while advancing Russian interests, which means these tactics are a matter of national security that may affect American institutions for decades to come.

“We are probably the richest and the most powerful country in the history of the world, so anybody who wants to do us harm has to look for asymmetric ways to do that,” Sipher said. “The Russians have given others a good way of doing that by taking advantage of our open society and our social media, which was set up specifically to make money. If you want to buy shoes, you’re going to get pummeled with information on shoes. Bad actors can use the same technologies and the same algorithms to pump you with disinformation or bad information.”

Social media and other emerging technologies have allowed people to connect and share information in new ways. That openness, which bridges distance, language and cultures, has made the world a smaller place by bringing people together. It presents, however, a new opportunity for enemy actors to gain access to political and economic influence in the U.S.

“There are parts of our society that North Koreans or Chinese or Iranians or others are going to be able to use against us,” Sipher said. “Our reliance on computer systems and data-driven information suggest that it’s just going to get more difficult in the future. We live in a glass house, so our whole society depends on the interconnectivity of computers. It’s a vulnerability that we need to focus on.”

Sipher currently serves as director of client services at CrossLead, a software firm. He is the co-founder of Smersh.tv, a firm providing espionage-related content to the entertainment industry and he also works with a variety of cyber security and language-learning companies. The company’s name is a reference to a short-lived World War II soviet spy agency that was fictionalized and made popular in James Bond novels and movies.

A graduate of Hobart College — where he was a member of four NCAA Division III champion men’s lacrosse teams from 1980-83 — Sipher holds a master’s degree in international affairs from Columbia University. He has attended executive courses at Harvard University, Northwestern University’s Kellogg School of Management, the Aspen Institute and the Intelligence Community’s executive leadership program.

Sipher is a recipient of the CIA’s Distinguished Career Intelligence Medal. He has served as lead instructor in the CIA’s clandestine training school and was a regular lecturer at the CIA’s leadership development program.

“This is not simply a wonderful homecoming for John Sipher but also an opportunity for the College and the public to hear an up-close analysis of current developments,” Steck said. “There are probably few persons, inside the CIA or outside, with John Sipher’s level of knowledge and experience.”

Political science and history majors may naturally find Sipher’s talk of interest. Sipher urges students of all disciplines to inform themselves on the current state of Russian-American relations. It is a topic that is likely to dominate political and technological news for decades to come.

According to Sipher, America faces a form of asymmetric warfare. The Russians “are trying to look for our weaknesses and exploit them. By us responding in a totally domestic way, a partisan way, it plays right into their hands. For people who hear on the news these sort of domestic political attacks, it’s good to get the background so you understand this is a national security issue now.”