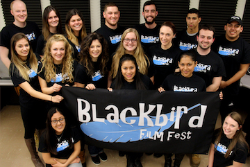 
One hundred and forty films.

The 2017 edition of the festival features more films, more off-campus events and remains free and open to all. Scott Williams ’82, the executive producer and lead writer for the hit television show “NCIS” will host an industry workshop, as will a panel of New York State film and television development officials.

And free popcorn will be available all weekend long at the Blackbird snack bar.

Sam Avery, assistant professor of communication studies at SUNY Cortland, is the festival’s founder and director of programming. The festival began four years ago as a forum for student films, became an online film festival in 2015 and found a physical home at SUNY Cortland in 2016.

“It was a great first start but there were many areas for improvement,” Avery said. “Almost as soon as the 2016 festival ended, I started making plans for 2017. Blackbird has a team of 17 event coordinators working tirelessly to make this the best year yet. We are screening over 140 short films this year and have received R.S.V.P.s from over 100 filmmakers. We are expecting a much larger turnout this year and we have made sure everyone will have a seat.”

The festival opens with an information session and roundtable on film production in New York State with a team of experts from the Governor’s Office of Motion Picture and Television Development. The forum will provide information for first-time filmmakers to veteran producers looking to find crew and locations and how to take advantage of tax credits to finance a production.

Following a welcome ceremony and the opening block of films in Sperry Center from 6:30 to 8:30 p.m. on Friday, the festival shifts to Bru64 on Main St. in downtown Cortland for a kickoff party. Ithaca-based band Kitestring will perform.

On Saturday, there will be six blocks of films in a variety of genres from family to shorts to documentary to horror.  Films will be shown in Sperry Center and run from 10 a.m. to 10:15 p.m.

Also on Saturday, Williams, a former Red Dragon football player, will host his workshop from 4:45 to 6 p.m. He will discuss his work both as a screenwriter and producer on television shows such as “NCIS,” NYPD Blue,” “Third Watch,” “Crossing Jordan,” “Bones,” “Without a Trace,” “The District” and “Castle.”

Sunday’s schedule includes five more blocks of films in Sperry Center, including animation and comedy, from 9:30 a.m. to 5:15 p.m. An awards ceremony dinner will be held at the Cortland Repertory Theatre in downtown Cortland at 6 p.m.

“Blackbird includes a variety of wonderful films made by local filmmakers from the central and upstate New York area,” Avery said. “Attending the festival this year will be directors from Buffalo, Albany, Rochester, Syracuse, Auburn, Locke, as well as Cortland. Make sure to come out and support our local filmmakers as well as experience what film in central New York is all about.”

The Blackbird Film Festival strives to be an inclusive environment, featuring experienced professionals, first-time filmmakers and students. Topics to be tackled in the 120 films range from “race and politics, life and death, space and time, and everything in between,” according to the festival’s mission statement.

A pre-festival series of films, “Race and Politics in America,” will be shown on campus on April 19-20. These films will be shown in conjunction with SUNY Cortland’s Africana Studies Department which had originally planned to show them in February, during Black History Month. They were pushed back from February to coincide with the Blackbird Film Festival.

On Thursday, April 20, poet Nkosi Nkululeko will perform before the screening of “How it Sounded to Squish a Cockroach,” a film that features his work.