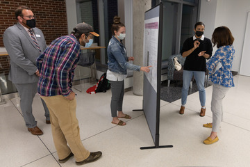 A celebration of student research and the success of SUNY Cortland graduates in the sciences, the annual symposium allows undergraduates and alumni to network and share their findings.

This year’s alumni presenters were:

On Friday, alumni presenters met with students and faculty for a lab crawl through Bowers Hall that included a demonstration of the effect of environmental enrichment on complex skill learning in prenatal ethanol-exposed rats by Nathaniel Rose ’20 and a demonstration of a wind tunnel built by physics students led by senior physics education major Emily DeClerck. Associate Professor Eric Edlund of the Physics Department closed the evening with a presentation from SUNY Cortland’s planetarium.

Seventeen other students talked about their research with presenters and faculty, as documented in posters that were hung in Bowers Hall’s hallways.

On Saturday, the three presenters led discussions about their work. Two of them were current undergraduates, Olivia Langdon and Bettina Bonfiglio. Langdon, a biomedical sciences major, talked about her research in the role of glutamatergic neurons in the locomotion behavior of larval zebrafish. Bonfiglio, a geographic information systems major, spoke on her recent work comparing carbon sequestration estimation methods using GIS in Cortland County.

Fiore’s plenary session, “Living in a microbial world: Interdisciplinary approaches to understanding the influence of microbes on multicellular life,” focused on her expertise in community ecology, microbiology and analytical chemistry. Her current research specializes in the diversity of freshwater sponges in western North Carolina. Fiore earned a master’s in marine biology from the College of Charleston and did her Ph.D. studies in microbiology at the University of New Hampshire.

McNeill’s presentation, “The excitement of discovery: It started with undergraduate research (and it still drives me!),” recalled his first experiences in research as a Cortland undergraduate and how he applied those lessons to his further career in academia. After earning a master’s in geology and a Ph.D. in marine geology and geophysics at the University of Florida, McNeill pioneered the use of magnetostratigraphy in shallow water carbonate rocks to provide age markets in difficult to date deposits. An author of more than 80 peer-reviewed publications, he teaches courses in undergraduate geology and maintains an active research program at the University of Miami.

Shepson led a session titled, “The impact of SUNY Cortland on a long academic career and a gifted life.” “I feel like many of the fantastic things that I have experienced had their origins in my start at SUNY Cortland, supported by a lot of luck and hard work,” he said. An expert in the exchange of gases between the surface of the earth and the atmosphere in a variety of environments, Shepson was director of the Division of Atmospheric and Geospace Sciences at the National Science Foundation from 2014 to 2018. He is currently working with New York state in developing plans for climate change mitigation.

The symposium is funded through an endowment via a significant planned gift from Michael Bond ‘75, M.D. Medical director of Advanced Dermatology and Cosmetic Surgery in Orlando, Florida, Bond is an accomplished scuba diver, underwater photographer and published author in Marine Geology and National Geographic who credits his time spent on undergraduate research with Professor Emeritus David Berger as vital to his ability to apply to medical schools.

William Baerthlein ’76, M.D. has made a major gift to support the immediate needs of the symposium. A member of SUNY Cortland’s Academic Hall of Fame and the Cortland College Foundation board, Baerthlein is a physician whose scholarship and expertise on methods for delivering babies has greatly influenced reproductive medicine.

The symposium builds upon other avenues SUNY Cortland has developed to celebrate undergraduate research, including Summer Research Fellowships and Transformations: A Student Research and Creativity Conference. Visit the Undergraduate Research Council’s website to learn more.