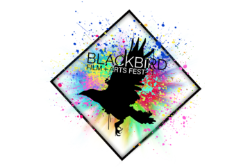 
There will be something for everybody at the 2021 Blackbird Film Festival, which will be held from Thursday, June 17 to Sunday, June 20 at Greek Peak Mountain Resort.

That goes for festival attendees as well as the students and young alumni who are gaining valuable experience doing the behind-the-scenes work that makes this annual festival possible.

King, who was the first student to graduate in the media production major, has been working with and showing films in the festival since she was a student. She was an intern, the assistant director of viral communications and is currently the social media director.

“I came to Cortland to learn about production,” King said. “I want to be involved in production for film and TV. I’ve found out that I excel at the areas of producing and casting and that’s definitely what I want to get into.”

The hands-on experiences King has had, both as a Cortland student and through Blackbird, have given her a deep appreciation for the process of making and sharing films. Her documentary on the 2019 Cortaca Jug game at MetLife Stadium, “Cortaca: The Road to MetLife,” was screened at the 2020 festival.

King, now the digital marketing manager for the restaurants at Greek Peak Mountain Resort, also had impactful encounters at previous Blackbird festivals, getting to meet and chat with other filmmakers and make important connections.

“I would say that the professors at Cortland, the classes, the equipment, the hands-on opportunities and the experiences to actually get our hands dirty and make films, that what sets it apart,” King said. “And that’s what has helped me now. I have more experience under my belt than most people my age do.

“Most schools don’t have that high-caliber film festival experience, so it’s all helped me as a working adult now with my resume. I’ve gotten praise from everywhere I’ve applied to about my experience and I think my time at Cortland will help me with my next steps in life.”

Marley got her start with Blackbird in 2017 as event coordinator before serving as assistant director of digital content and marketing during her senior year in 2018. Those experiences, as well as her time as president of CSTV, led to an internship with “Bridge Street” on NewsChannel 9 WSYR.

Now, Marley is working full-time as a producer for “Bridge Street,” a daily lifestyle show.

While the Blackbird Film Festival is ostensibly an opportunity for filmmakers to share their work and filmgoers to sit back and enjoy the show, it’s also become an important networking tool for SUNY Cortland students and alumni.

“This is one of those places where you can make connections and get a job,” Marley said. “The big appeal is that there are so many valuable people who come every year. In 2017, we had people from different continents, from Europe and Australia.”

Working at “Bridge Street” with graduates from Ithaca College and Syracuse University, Marley has had many opportunities to share college stories with her coworkers. The one thing that always stands out to her is talking about previous Blackbird festivals and how much that added to her learning in the classroom and through organizations such as CSTV.

She’ll be volunteering throughout the 2021 festival as well, which has become a can’t-miss event for many young alumni from the Communication and Media Studies Department.

“It’s almost like our Cortaca,” Marley said. “It’s a pivotal way for alumni to come back. It’s like a reunion. To see the other interns and students I’ve worked with is very nice. I’ve kept in touch with Sam and it’s nice to touch base at Blackbird.”

Current students are involved in this year’s festival, including senior Shannon Delaney, a dual major in communication studies and graphic design and digital media, who is working as Blackbird’s social media coordinator.

Delaney had tried pursuing screenwriting earlier in her time at Cortland but really uncovered her passion during her sophomore year when she created social media posts for the festival.

“An important lesson Blackbird gave me, and it was not intentional obviously, but I kind of figured out I liked working with social media posts and graphic design and event planning more than I was interested in than the films,” she said.

“I knew I liked advertising and marketing, which is why I initially came into Blackbird through other friends who told me about it. It helped me narrow down what I really enjoy so I can find that in a career. I’m not just going into something I can do but something I want to do.”

Delaney is looking forward to the films at this year’s festival and she’s also excited for all of the other activities planned beyond the screenings.

“Compared to other, larger, film festivals, I think Blackbird is different in that we really try to bridge the gap between the filmmaker and the audience,” she said. “Having question-and-answer sessions after the films, I think that’s a really unique experience. The set-up for Blackbird 2021 is something I’ve never heard of, where it’s an arts fair too and there’s always something to do. There’s no waiting between films. When something isn’t going on, something else is going on.”

The festival will include: