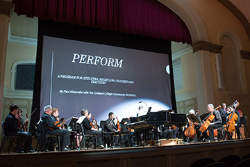 
SUNY Cortland students and faculty have been making beautiful music together with residents in Cortland County for a very long time.

That will continue, thanks to a local philanthropic family’s wish to support the future of the College-Community Orchestra and the Choral Union.

Soon, as the College ends its primary sponsorship of the two musical ensembles cherished by many Cortland-area people, the Dan & Rose McNeil Foundation will step in to provide financial support and a rehearsal location. Both the College and the foundation will share performance venues.

“The vision of The Dan & Rose McNeil Foundation is to support the arts in the Cortland community,” according to an announcement by the foundation, which is run by the owners of the local commercial development firm and past College benefactor, McNeil Development Company.

“With this in mind, we are proud to announce that the Dan and Rose McNeil Foundation, in collaboration with SUNY Cortland, is committed to the preservation of the SUNY Cortland Choral Union and Cortland Community Orchestra.”

Long associated with music and performance in the local community, the Dan and Rose McNeil Foundation also plans to sponsor extended performances to enhance the presence of the two ensembles within the community.

“We’re still in the process of organizing the relationship for next year,” said SUNY Cortland President Erik J. Bitterbaum. “What I can share is we’re very excited about this joint relationship between the College and the McNeils.”

Bitterbaum originally was approached last fall by McNeil family members Daniel McNeil Sr. and David J. McNeil, who had expressed concern about the future of the vocal and orchestral ensembles.

“They had an idea,” Bitterbaum said.

The McNeils had purchased a former church at 19 Church St. that they were turning into a community space and a venue for concerts and lectures.

“They will be excited to promote both music and speakers,” Bitterbaum said. “We’re very interested in joining forces in order to provide this enrichment for the community.”

SUNY Cortland students who participate in either ensemble will earn college credits and enrich their lives as they gain mastery of these musical forms.

The new partnership comes at a key time. The College’s Performing Arts Department must devote more of its rehearsal and performance space, faculty and student participation and fiscal resources to its growing musical theatre program, according to Professor of Performing Arts David Neal.

The fall 2018 freshman class, with 23 students, is the largest in the College’s history, and classes have been steadily increasing for the last three years, according Department Chair and Associate Professor Deena Conley.

Neal led the Choral Union for three semesters and will continue to lead it going forward.

“I think this is a really positive development,” Neal said. Non-majors and community members will continue to have these ensembles as a part of the Cortland experience, while the department will be able to direct its resources to capitalize on the growth of the musical theatre major.

“I was encouraged when the McNeils proposed the establishment of the foundation in order to help support it,” Neal said.

Bitterbaum noted that Ubaldo Valli likewise has offered to continue to conduct the orchestra ensemble.

“The McNeils hope to hire someone to represent their interests in working with the College in the future,” Bitterbaum said.

Bruce Mattingly, dean of arts and sciences, will serve as the College’s liaison with the Dan and Rose McNeil Foundation.

Both ensembles have existed for many decades.

Cortland: Our Alma Mater, by Bessie L. Park Class of 1901, relates that in 1952, the existing College Symphonette became the College-Community Orchestra by inviting members of the community to join its original ensemble composed of students and faculty.

Although the Choral Union is mentioned in neither Park’s 1960 history book, nor the 1991 book Cortland College: An Illustrated History, by Leonard F. Ralson, the choir’s likely early precursor was the Varsity Choir, which is included in Park’s book.

Now, town and gown will continue to work together to improve cultural life in Cortland County.

“We’re just very, very pleased this could come about for the future,” Bitterbaum said. “I believe it’s a win-win situation for the College. And it’s because of the McNeils.”