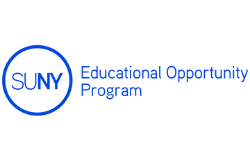 What is the value of education?

Using readings by philosophers Plato, Alfred North Whitehead and others, “The Value of Education” course began with the premise that a student must first understand what education is before they can know if they are receiving one.

The course was taught online by Lewis Rosengarten, director of SUNY Cortland’s EOP, and AnnaMaria Cirrincione, director of the Multicultural Life and Diversity Office. Rosengarten reminded students that education is more than just an acquisition of facts. According to social psychologist Sheldon Solomon, a former colleague of Rosengarten, education also requires socialization, critical thinking and aesthetic awareness, moral courage and a reconstruction of self.

Blending the classics with contemporary influencers, powerful messages from a Beyonce and Jay-Z music video, the Spike Lee film “Do the Right Thing” and the writings of Dr. Martin Luther King, Jr., scholar W.E.B. DuBois and novelist Alice Walker were used to illustrate the components of imagination, creativity and hard work and the role of education as the great equalizer.

Cirrincione asked students to think about what role imagination and hard work will play in their academic success.

Enrollment in and successful completion of the Summer Institute is a requirement for all incoming SUNY Cortland EOP first-year students. The four-week long course helps students make the transition from high school to college.

“You’re here because you have been deemed as someone with fantastic academic potential and potential in life,” Rosengarten told students. “We want you to be a force on this campus, armed with all these academic tools.”