City Trip to Send Student Writers Back Hundreds of Years 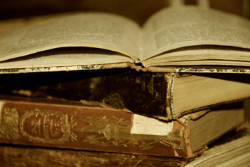 
SUNY Cortland student writers will get down to the basics of their craft by examining — and in some cases handling — rare artifacts that date back more than 500 years. It’s part of an upcoming two-day trip to New York City that dives into changes in writing and inquiry over time.

Students in “The Evolution of Writing,” a 400-level Professional Writing elective, will depart Friday, Oct. 10, and make four stops in their travels: the New York Public Library, the Morgan Library and Museum, Strand Bookstore and the Cloisters, which is a branch of the Metropolitan Museum of Art.

They’ll catch glimpses of Sumerian artifacts and early copies of both the Gutenberg Bible and Homer’s Iliad. And they likely will get to touch an incunable, a printed page from the 1500s. A docent, or an expert museum guide, will teach them about scribal arts and paper-making.

“That’s actually the coolest part of all,” said David Franke, a professor of English who for the past three years has organized the trip. “We’ll actually get to touch some of the earliest pieces to come off the printing press.”

The Professional Writing course examines shifts in writing technology over time — from Egyptian hieroglyphics to the typewriter to the advent of Twitter — as well as the changes in identity, culture and knowledge that come with them. It focuses specifically on three major events, or “technological crises,” as Franke refers to them: the advent of the alphabet, the invention of the printing press and the emergence of computer technology.

The upcoming trip provides a hands-on outlet for their work in the same way an artist might study the halls of the Louvre. New to this year’s itinerary is a visit to the Cloisters, a museum that includes several artifacts from medieval Europe.

This semester’s students have devoted plenty of their attention to arguments that assert a deep relationship between communication tools and the content of cultural conversations, Franke said. In March, the professor spoke to changes in writing as part of a talk for the College’s Cultural and Intellectual Climate Committee (CICC) “R/Evolution” series. Specifically, he brought evolutionary concepts of biology to the discussion of changing writing technologies, suggesting that misunderstandings about the nature of evolution — when imported to explain the development of writing systems — cause similar kinds of distortions.

Fortunately, his class is headed to New York City to clear up those myths and view first-hand the technologies of centuries past.

Support for this year’s trip was provided by an Auxiliary Services Corporation (ASC) grant, the President’s Office, the College’s English Department and the School of Arts and Sciences.