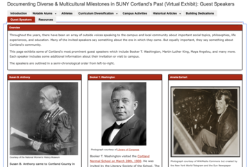 
In 1962, members of the SUNY Cortland House of Delegates, what is now known as the Student Government Association, penned a letter to a civil rights pioneer.

At the time, James Meredith was the first Black student to have been admitted to the previously segregated University of Mississippi. Riots broke out on the campus in protest of Meredith’s admission and his story drew national attention. A statue of Meredith now stands on the spot of what was a pivotal moment in racial justice in America.

The SUNY Cortland students wrote Meredith in support, saying “We are with you as you continue to defend a principle which we strongly believe in, adhere to and live by. The torch you are carrying is capable of illuminating the eyes of the world toward truth and equality for all.”

This message was captured in the student newspaper, The Hilltop Press, and is evidence of the many ways in which SUNY Cortland has promoted and inspired diversity and inclusion in its past.

The letter to Meredith and much more is now available through the College Archives in a new, virtual exhibit, “Documenting Diverse and Multicultural Milestones in SUNY Cortland’s Past.”

“We wanted to create this exhibit to highlight some important events, people and transitions in Cortland’s past that deserve recognition, but also attempt to examine some moments of activism within the campus as well as the nation,” said Archivist and Instructional Services Librarian Jeremy Pekarek.

The exhibit was created as part of an internship with the College Archives by Kayla Bellan ’21 during the Spring 2021 semester. Bellan, a history major, researched, drafted descriptions, scanned and uploaded content and assisted Pekarek in the arrangement and creation of an outline.

Several sections are part of the exhibit, including:

Other notable highlights of the exhibit are a brief biography, photo and newspaper clippings about SUNY Cortland’s first Black graduate, Abraham Lincoln DeMond ’1889; information on the establishment of the Educational Opportunity Program and the Multidisciplinary Center for Minority and Women’s Studies; and columns by Charles Alexander ’74 in the student newspaper The Press, which raised essential questions about issues of the time such as race, racism, equality and campus life.

“One of the most recent additions to the exhibit included the James Meredith letters published in the student newspaper,” Pekarek said. “I find this moment fascinating because of the connection between the great civil rights icon and SUNY Cortland’s students almost 60 years ago, split by almost 1,200 miles. I believe that the students who publicly supported Meredith may act as a symbol of what anti-racism efforts look like on campus.”