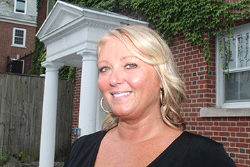 
Caitlin Goodwin ’11, M ’16 has been named the 2022 New York State History Teacher of the year by the Gilder Lehrman Institute of American History, the nation’s leading organization dedicated to K-12 American history education.

Goodwin, a social studies teacher at McGraw Jr. Sr. High School in McGraw, N.Y., is now one of 53 finalists for the 2022 National History Teacher of the Year Award, to be announced in October.

“Ms. Goodwin has always demonstrated a love of history and passion for teaching our students at McGraw,” said one of Goodwin’s award nominators, Mark Dimorier, principal of McGraw Jr. Sr. High School, where Goodwin has taught seventh and eighth graders for 11 years.

“Whether she is bringing students to Washington D.C. or France or just bringing them outside to reenact the Battle of Bunker Hill in the snow, she is enthusiastic, innovative and gets kids excited to learn, in and out of the classroom.”

Goodwin has kept close ties to SUNY Cortland's History Department, where she earned both her B.A. and M.S.Ed. degrees in adolescence education and history. She currently is enrolled in the Educational Leadership program of the university’s School of Education for a certificate of advanced studies (C.A.S.).

The sample lesson plan Goodwin submitted with her application to the Gilder Lehrman Institute originated with an undergraduate paper she wrote for a course she took under SUNY Cortland History Professor Randi Storch. It explored the New York Central College, America’s first racially and sexually integrated college, which operated from 1849 to 1860 on land now occupied by McGraw’s high school. Since then, Goodwin has worked closely with the McGraw Historical Society to develop an ever more engaging classroom experience.

Goodwin’s class spends almost five days studying aspects of the college’s historical significance, including the geography that placed it in this unique location and central and western New York’s history of religious revivals and new religious and progressive movements In the mid-19th century. That Included the movement to abolish slavery in the U.S., notably led by Gerrit Smith of Peterboro, N.Y., the college’s founder.

Started by Smith and other abolitionists before the Civil War the New York Central College not only modeled the racially integrated and co-educational college classroom that produced some noteworthy Americans, including Mary Edmonia Lewis, the first African American and Native American sculptor to achieve international recognition.

“The New York Central College is not only notable in our area, but has national connotations to very famous people and social movements,” Goodwin said. “It was the first college in the nation to have Black professors teaching white students, too.”

“I chose this lesson plan in particular to share with Gilder Lehrman because it’s something for kids to be proud of, especially in a small, rural district like McGraw,” Goodwin said. “You have students who don’t feel any kind of pride in their community. I think that’s a really big part of citizenship. It’s important to know and for kids to work with these primary sources just a five minute walk from school.”

Goodwin aims to show her students both the beauty of exploring their own community’s past and how they can be better citizens in the future by looking critically at conflicting or potentially misleading or inaccurate information.

“I really just view teaching as a chance to prepare a well-rounded group who knows about their country, and the world, who understand what it means to be a good American or a good global citizen,” she said of her students.

“They’re the best. At that age, they are still so excited to learn,” said Goodwin of teaching the 12 and 13-year-olds for whom she strives every day to bring history alive while she coordinates speakers, special events and local and national field trips on the side. “I. Laugh. Every. Day. I love it,” she said.

“They do everything right here,” Goodwin said. “From someone who’s done professional development all around the country, I can’t imagine getting a better education in the scholarship of teaching history and in history itself than here, from these professors.”

Her professional growth included participation in the ‘Forever Wild’ weeklong immersive experience for K-12 educators that reveals the historical importance of the Adirondack wilderness during the Gilded Age and Progressive Era. SUNY Cortland History Department Professor and Chair Kevin Sheets and Storch run the program, supported by the National Endowment for the Humanities (NEH). It is held, in part, at the university’s William H. Parks Family Center for Environmental and Outdoor Education in Raquette Lake, N.Y

Goodwin’s learning journey continues at summer’s end, when she departs for Germany among a SUNY Cortland student and alumni cohort led by Associate History Professor Gigi Peterson. They will participate in a Universität Potsdam Summer School, “Teaching the SDGs,” that is, the United Nations Sustainable Development Goals, and “Engaging in Global Citizenship.” Afterward, Goodwin and a second alumni educator, Taylor Weigand ’10 of Binghamton (N.Y.) High School, will continue to collaborate as alumni-teacher associates on the international learning community project with Peterson and the Adolescence Education Social Studies Program.

A member of the Central New York Council for Social Studies, Goodwin has engaged in myriad national and international programs and professional development opportunities, including the Albert H. Small Normandy Institute, in which she and a student traveled to France to study the D-Day campaign. A Ford’s Theatre Master National Oratory Fellow, she was recognized as a Lincoln Teacher Leader.