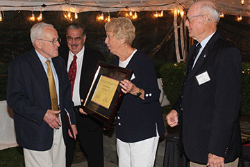 
Two retired Homer (N.Y.) Central School District educators were honored by SUNY Cortland on May 4 for making Cortland County a better place to live and the university a more vibrant educational setting.

During 2000 and 2001, most in-person ceremonies on campus were postponed due to public safety concerns resulting from the COVID-19 pandemic. With these awards, the university moves forward in simultaneously hosting two recognition events for model Cortland County citizens.

Cecconi over his long career greatly expanded recreational opportunities for Cortland County youth while excelling as a science teacher at Homer Junior High School, before pivoting in retirement to go “all in” for his alma mater.

Likewise, VanPatten first made her mark as an educator in the Homer Central School District and then faithfully served the Hospice Foundation of Cortland County as well as the Cortland Regional Health Center and the university.

The College-Community Appreciation Award is sponsored by the College Council. It was created in 1985 as a means of thanking persons who have assisted SUNY Cortland in a significant manner. Cecconi is the 36th citizen to receive the honor and VanPatten is the 37th. The most recent honoree, in 2019, was Katherine Emerich Compagni ’68, M ’74, executive committee member with the World Service Council of World YWCA and former board member of the Cortland College Foundation. View a complete list of past winners.

Even before the day he graduated from college, Cecconi began a long career of giving back to the greater Cortland community.

Cecconi, a retired Homer, N.Y., science teacher, began making his mark on generations of young minds in September 1974 at Homer Junior High School. In Spring 1974, while student teaching there, Cecconi volunteered to coach the fledgling Varsity Lacrosse B team, bringing that team up to school sponsorship level in two years. He coached the varsity lacrosse team from 1981 to 1984 in addition to coaching the junior varsity team from 1976 to 1980. He continued to coach at all levels the remainder of his years at Homer.

Cecconi launched his school’s Environmental Science Club in the mid-1970s and was recognized as the Conservation Teacher of the Year in 1977 by the Cortland County Soil and Water Conservation District. The club evolved into the Jr. High Science Club. Cecconi continued to co-advise the club for more than 25 years. He helped organize the Cortland Area Science Teachers Association.

Additionally, Cortland County Cooperative Extension hired Cecconi as one of five supervisors of the United States Youth Conservation Corps in the summers of 1974 and 1975. These youth crews constructed all the walking trails at Camp Owahta in Solon and built overnight sleeping dormitories for future campers. The second summer, the program shifted focus to Dwyer Memorial Park in Little York, where Cecconi’s crews helped build walking trails and renovate many park facilities.

From 1982 to 1986, as part-time recreation director for the Village of Homer, he managed the land purchase on Route 281 for Calale Field and then ran projects to develop the fields, fencing, parking lot, storage building and restroom facilities. He also helped establish the Greater Homer Youth Soccer League, which has grown tremendously over the years. From 1975 to 1999, he initiated and ran the Homer Summer Lacrosse League, which featured three age divisions, grades 3 to 6, 7 to 12 and post-high school.

For three years, from 1985 to 1987, Cecconi served his alma mater as an assistant varsity coach for SUNY Cortland’s lacrosse team.

He joined the SUNY Cortland Alumni Association’s Board of Directors in 2009, serving for 12 years on key committees and fulfilling multiple volunteer roles with the Lynne Parks ’68 SUNY Cortland Alumni House. Cecconi is currently involved in the CLAX Legends Weekend, which since 2019 annually reunites lacrosse alumni and recognizes their contributions. He is a key organizer of the Draggin Draginz, the SUNY Cortland lacrosse games and gatherings suggested for the Class of 1989 and earlier grads. He also helped organize the Delta Kappa Beta (1925 to 1991) fraternity’s first and second reunions, in 2014 and in 2019.

Now an emeritus board member, he is always on hand when an event such as Senior Send-Off, Orientation or Alumni Reunion calls for a ready and cheerful alumni ambassador.

Cecconi was honored in 2019 by the SUNY Cortland Alumni Association as an Outstanding Alumni Volunteer.

“All of my volunteer work is considered ‘payback’ to Cortland State for all that it has given me: a successful teaching and coaching career, two post-bachelor’s degrees, meeting my wife (Christine Perry Cecconi ’74), establishing lifelong friendships, a sense of self-confidence and access to an overall high quality of life,” Cecconi said.

Chic and Christine have two children, Andrea and Nicholas, and two grandchildren.

VanPatten of Cortland loves to volunteer her services to local community organizations and the university.

“Anything I can do, just let me know,” she offers to SUNY Cortland and Alumni Engagement officials.

Currently serving as vice president of the Hospice Foundation of Cortland County Board of Directors, VanPatten has actively volunteered with the foundation for at least 15 years.

For years until the COVID-19 pandemic, she served visitors at the Cortland Regional Medical Center coffee shop as a volunteer.

She has participated in and helped run numerous events as a SUNY Cortland Alumni Association committee volunteer since 2010.

A founding member of the SUNY Cortland Alumni Association’s Cortland chapter, VanPatten continues to serve as a chapter committee member and also has served on an alumni regional committee.

Because she lives nearby the Parks Alumni House, VanPatten also rolls up her sleeves and helps with more behind-the-scenes tasks like baking cookies for alumni events, trimming the rooms for the holidays or occasionally ensuring that guests there are well-treated when staff are away.

“I love talking to the kids,” VanPatten said of her many hours helping SUNY Cortland students navigate the college experience and emerge at Senior Send-off as new alumni.

To be perfectly honest, to VanPatten it’s all about having fun.

“Since I’m from Long Island, I love asking them where they are from,” VanPatten said. She often shares the “fun table” with former classmate Ann Devery Hotchkin ’75, a Rockland County native.

“Between the two of us, we compete to see who can get the most students who come from either place, and I usually win.”