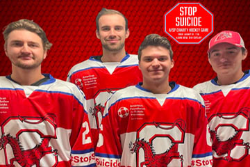 
The SUNY Cortland men's ice hockey team will be holding a #stopsuicide charity game and resource fair on Friday, Jan. 28 at 7 p.m. in support of the Central New York chapter of the American Foundation for Suicide Prevention (AFSP).

The Resource Fair will be held on Jan. 28 at 6 p.m. in the Park Center Hall of Champions area on the second floor (gallery area outside of the gymnasium entrance).

Cortland will host Oswego that evening at Alumni Arena, and fans can show the community that they're voices for suicide prevention in a number of ways, including:

• Bidding on limited edition AFSP/Red Dragon charity game-worn jerseys, with all proceeds going directly to the AFSP.  (Jersey Auction Web Page)
• Becoming a sponsor - there are multiple levels of support available for individuals and organizations to fund the event.
• Participating and encouraging others to attend the Resource Fair. The theme is "Have a Real Convo," which is part of the AFSP's social media campaign to increase awareness of effective ways to reduce the likelihood of loss by suicide.
• Providing raffle or door prize items for the game-day auction.
• Making a cash donation.
• Purchasing a game-day charity logo puck.
• Purchasing tickets and attending the game on Friday, Jan. 28!

Funds raised allow the AFSP to fund research, create educational programs, advocate for public policy, and support survivors of suicide loss. The Red Dragons raised more than $11,000 for AFSP in a similar event during the 2019-20 season.

Any questions about the auction can be directed to Cortland assistant coach Stephen Castriota at stephen.castriota@cortland.edu or 607-753-4995.