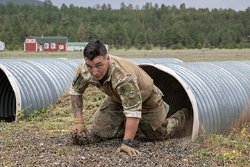 
Cpl. Dakoatah Miller hasn’t jumped through hoops for the New York Army National Guard, but only because they haven’t yet asked him.

The Cortland resident placed second, competing against 12 other National Guard personnel from across the U.S. from July 19 to 23 at the Army National Guard’s Best Warrior Competition in Camp Navajo, Arizona.

His chosen major helped prepare him for reaching that goal.

“I had the knowledge to build a good program to meet the specific physical requirements,” he said.

Miller, who is a member of the 2nd Battalion, 108th Infantry Regiment’s headquarters company based in Utica, N.Y., took on 12 other soldiers or non-commissioned officers from six other multi-state regions of the country.

At the end of the competition, one soldier and one non-commissioned officer were selected to advance to the U.S. Army Best Warrior Competition in fall 2021 competing against the Army’s top soldiers from active duty, reserve and National Guard forces.

Having previously competed at battalion, brigade, state and regional levels before giving his all in the national competition, the Best Warrior Competition was his shot at becoming the best junior enlisted soldier in the 350,000-member Army National Guard.

Only the winner was announced this year at the competition’s conclusion.

“I found out later that I was the runner up,” Miller said. “My sergeant major in New York state let me know.

“Everybody was pretty close overall, everyone had their own strong point and their weak point, as far as we knew,” he said.

The Facebook page for the Best Warrior Competition has a video clip of him and other soldiers in action.

He had arrived several weeks earlier to prepare to compete in 20 events with his counterparts in teams from around the U.S. so he would be able to handle the Army National Guard’s training site at approximately 9,000 feet elevation.

Among the tests was a “mystery event” Miller found out about on the day it took place: a patrol lane in which each soldier got to practice being a squad leader. That led to small groups being graded on their ability to conduct an urban assault operation on a training house.

Although he’s a full-time student at SUNY Cortland, Miller has been taking almost all of his classes online while he has been training full-time since December on active duty for Best Warrior competitions at all levels.

He and training partner Staff Sgt. Stephen Mulholland of Auburn, N.Y., also of the 2-108th headquarters, previously had bested their peers in May at the 27th Infantry Brigade Combat Team and New York Army National Guard at the Northeast (Region 1) Best Warrior competition in Fort Dix, New Jersey, according to Schneider. The pair had competed against soldiers from six other northeast states. Miller placed first in the soldier category, earning him the Best Warrior spot at the national level. Mulholland, who had placed second in the Region 1 competition’s non-commissioned officer category, also traveled to Arizona to support Miller’s efforts as a sponsor.

“We’ve been training together for so long that it’s been a good fit,” Mulholland said.

A Flickr photo collage shares images of the New York contenders in the competition as it was underway.

Preparation has included physical fitness workouts twice a day, with hands-on practice with weapons, radios and other equipment in between. Miller also took time to study Army doctrine, regulations and history.

Miller said he entered into the latest round of competition with full confidence.

“Having done this for so long, getting to this point, I’ve done everything I can,” Miller said.

Born and raised in Cortland, the son of Doug Miller and Christina Ramo, Miller was inspired by his twin brother, Schuyler, who joined the Marine Corps right out of high school and recently completed his active duty service. Dakoatah took off one semester from SUNY Cortland in 2018 to finish his basic training.

“I still have a couple of options open. I haven’t figured it out,” he said about his future after he graduates, either next spring or later if he decides to complete more Army School training.

“I’m thinking of the personal training field,” he said.

That would include two weekends a month and two weeks a summer of active National Guard service.

“Right now, I think I might actually go active for a little while and see where that goes,” he said.