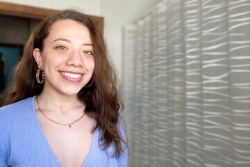 
As a high school student in Brentwood, N.Y., Edith Hernandez wasn’t sure if college was for her.

And after a first semester at SUNY Cortland that ended in academic suspension, Hernandez thought her hunch was probably right.

Yet with encouragement from her counselors and fellow students in the Educational Opportunity Program (EOP), Hernandez reapplied and refocused her energies on her classes. She leaned on her counselors and asked faculty members for help.

In the semesters since, Hernandez, a senior double major in sociology and Spanish, started seeing results. She’s made the Dean’s List three times, the President’s List once and is planning to attend the University at Albany to pursue a master’s degree in social work from the university’s School of Social Welfare.

Her ultimate goal is to become a government relations officer to help families in need.

For her efforts in the classroom and beyond, Hernandez recently was among 45 recipients from across the SUNY system to be recognized with the Norman R. McConney Jr. Award for Educational Opportunity Program Student Excellence.

“When Lewis (Rosengarten, director of SUNY Cortland’s EOP) told me I received this award, I was in shock,” Hernandez said. “I felt all of these emotions. I felt accomplished. It was one of the accomplishments in my life that made me so proud. I just got an award that has to do with my education.”

SUNY’s Educational Opportunity Program is a comprehensive support system that opens doors for academically disadvantaged students from low-income families in New York state. At Cortland, in addition to financial aid, students receive academic assistance, counseling and access to a community of other students who complete an annual Summer Institute orientation together.

Hernandez’s introduction to EOP was first-hand. Rommel Archaga, a guidance counselor at Brentwood High School, had encouraged Hernandez’s older sister, Evelin Hernandez, to apply to Binghamton University. Not only did Edith Hernandez follow in those footsteps, so too did their younger sister, Chermin Hernandez, who currently studies at SUNY Geneseo.

While Edith Hernandez was excited for her college career to begin, she found herself intimidated by coursework during her first semester. As her grades slipped, her confidence dipped.

After meeting with EOP counselors and getting encouraging messages from fellow EOP students, Hernandez decided to make an effort to connect with faculty members and ask questions that allowed her to better understand the material.

One of her first exams following her academic suspension was in a communications class. Hernandez got a 90. That not only let her know she was on the right track, it pushed her to keep working even harder.

SUNY recognized EOP student excellence with a virtual award ceremony in December. The award is named after the late Norman R. McConney, a University at Albany graduate who was the longtime chief of staff to State Assemblyperson Arthur O. Eve from Buffalo. McConney helped draft legislation that established the EOP and he went on to help create the New York State Black, Puerto Rican, Hispanic and Asian Legislative Caucus.

“It made me realize I have to continue living my life as I have been since I came back because it was a whole shift in my life and I was able to do that and push through,” Hernandez continued.

“I kept myself motivated but I also let others in. I wasn’t afraid to speak to other people if I needed help. That’s what I learned. I was so appreciative of being able to have come to college and have EOP. If it wasn’t for EOP, I wouldn’t have been able to go to college.”

Once she graduates in May, Hernandez hopes to dedicate her life to helping others through social work. After all, she knows first-hand the power of opportunity and the value of programs like EOP.

“As I’ve learned more about the outside world and how many kids and families struggle, it’s made me want to make the change for people,” she said. “I’ve started seeing how it affects a lot of people and the work being done to help them and I want to do that. I want to help families as well as people who are homeless. I want to help get people back on their feet.

“Basically, it’s about giving people a second chance in life, another opportunity in life. To know that people are here for you. People shouldn’t be looked down at. You’ve got this. That’s one of my main goals.”