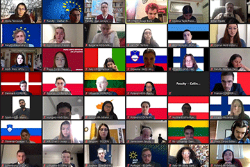 And, if you’re on hold to hear the dual American-Italian citizen gripe that her second year participating for Cortland in the SUNY 2021 Model European Union (MEU) in April had gone virtual — compared with her 2020 MEU experience that had involved an all-expense-paid trip to Brussels, Belgium — wait a minute.

Because, when it comes to big setbacks, Alvisi of Cortland, N.Y., thinks alike with Alexandru Balas, the SUNY Cortland associate professor of international studies who co-directed the recent Zoom platform MEU experience with four SUNY colleagues.

“I think it’s because we’re both European,” said Alvisi, who served in the role as president of Italy and at the simulation’s conclusion won the program’s “Most Likely to Become a Diplomat” award.

“We are definitely more pragmatic about the European kind of things, although Dr. Balas is way more laid-back than I am,” Alvisi said.

“So last fall, when my internship was cancelled, Dr. Balas said, ‘I think it’s a sign you’re going to be here for the MEU.’ And he told me, ‘You can also look into more graduate schools.’

“That’s definitely the European way of looking at things,” said Alvisi, who is concentrating in global economic systems.

Many of this year’s participants had also experienced last year’s successful trip to Brussels in January 2020, well before the international travel restrictions the pandemic imposed.

This year, instead of exploring New York City by day and night, the eight-member SUNY Cortland team met in virtual chat rooms with their fictitious international counterparts portrayed by college students from universities in the U.S. and around the world. Their simulation took place on two consecutive weekends toward the end of the semester, April 9 to 10 and April 17 to 18. Most Cortland team members represented Italy.

It has richly rewarded those who participated.

“It was a big switch up this year, as it was virtual, but I was so impressed with how Alexandru Balas and his colleagues set up the experience for students,” said new graduate Naomi Higgins ’21 of Yonkers, N.Y., an international studies major who was participating in her second MEU, this time simulating the European Union Commission president.

“The students were all used to Zoom, and it was very easy for them to navigate this platform with its breakout rooms for the four councils they negotiated in: European Council, Council of Foreign Affairs, Economic and Financial Affairs Council, and Committee of Permanent Representatives Council,” Balas explained. He also directs SUNY Cortland’s Clark Center for Global Engagement and coordinates the university’s International Studies Program.

While the Model MEU is a joint course and project of the university’s Political Science and International Studies departments, over the years students have participated from other departments and majors, including History, Economics, Modern Languages, adolescence education: social studies, and social psychology.

Even before the European Union was founded in 1993, SUNY Cortland introduced its students to European politics. The university served as one of the six founding members of the SUNY system’s Model European Union Conference more than 30 years ago.

Higgins said as EUC president she managed fellow student “staff” responsible for maintaining order in the virtual chat breakout rooms where the alternatives were discussed and ensured the ideals of the European Union were promoted alongside those of the individual member states.

“Having the opportunity to experience the highs and lows of a virtual conference will no doubt come in handy in the future, as I am sure we still have a bit of time before we are all back to face-to-face interactions,” said Higgins, who also valued this year’s simulation compared with 2020 in Brussels.

“As Professor Balas has always said to his students, these experiences are just further skills to add to your resume ‘toolbox,’” said Higgins, who this fall leaves for Ireland to pursue a master’s degree in conflict resolution and reconciliation at the Graduate School at Trinity College Dublin.

The MEU generally involves an intensive, three-day event full of in-person meetings. For highly motivated students, the two-week interval that organizers had designed into this year’s MEU left plenty of time for participants to reach out to one another so the second round of meetings could be very productive, Alvisi added.

“With Zoom, there’s no chance to mess up the seating,” added Alvisi, noting how last year she found herself representing Romania but initially having nothing relevant to say to representatives of other countries on either side of the long oval table.

“Last year, I didn’t speak that much until the end of the agenda,” Alvisi said. “But this year, as president of Italy, I spoke right away. I gave an opening speech which I believe is important. From the beginning, I had people message me on Zoom private chat, saying, ‘I agree with you,’ and ‘Hi, Italy, I thought your speech was good.’”

Jennifer Toribio, a senior international studies and political science major from Freeport, N.Y., said that when she began to prepare for this year’s conference, she was nervous about the obstacles that she would encounter.

“However, quickly as the conference began, I realized many benefits the virtual platform provided us with,” said Toribio, whose three-year, veteran status with MEU had prepared her to serve as the prime minister of Latvia and advise a novice team from Canada attending New York University.

“The extended period to negotiate allowed students to build more connections and comfort with each other,” she said. “They provided me with new friendships and helped me grow my knowledge as well. The Model European Union over the past years has prepared me for a future in diplomacy.”

Toribio looks forward to January 2022 when MEU returns to in-person meetings in Brussels.

“I still believe it is important to have an in-person interaction, but I was shocked at how well everyone managed to have successful negotiations,” Toribio said.

Balas, who was tasked with recruiting new universities to take part in MEU, noted how he made the most for the program despite the pandemic’s foreign travel restrictions.

“Going global with this conference allowed us to bring into this group of universities — for the first time — new colleagues from Brazil, Morocco, Georgia, India, Indonesia, Canada but also nearby universities like Le Moyne College and Wilkes University (in Pennsylvania),” explained Balas.

“For the first time we had universities from Africa and Asia bringing teams to the Global SUNY Model European Union Conference,” said Balas, who worked Juan Arroyo and Zakhar Berkovich, his counterparts from other universities, since summer 2020 to plan this year’s MEU. In early February, Michelle Benson-Saxton and Giulia Tercovich joined the organizing team. Arroyo teaches on Ithaca College’s political science faculty. Berkovich directs Undergraduate Student Services at the University at Albany’s Rockefeller College of Public Affairs and Policy. Benson-Saxton is an associate professor and director of Graduate Studies at University at Buffalo’s Department of Political Science, College of Arts and Sciences. Tercovich serves as assistant director at the Centre for Security, Diplomacy and Strategy at the Brussels School of Governance (formerly Vesalius College) in Belgium.

“I hope this cooperation will increase international ties between our universities beyond the conference,” he said.