“Annie Get Your Gun” Continues for Second Weekend 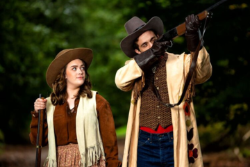 
Opening night of SUNY Cortland’s production of “Annie Get Your Gun” was a new experience for student actors.

They hoped the circus atmosphere of the College’s 150th birthday party celebration on Moffett Center Lawn followed them inside for the show.

Starting at 6 p.m. on Friday, Oct. 5, the College celebrated its Sesquicentennial with remarks from President Erik J. Bitterbaum, a video presentation and fireworks. Complimentary birthday cake was available for all. The cast of “Annie Get Your Gun” joined the festivities to sing Happy Birthday at approximately 7 p.m.

The show continues for a second weekend October 11 through 13.

Senior musical theatre major Liz Earle of Merrick, N.Y., who plays Annie Oakley, was glad to get out of the dressing room in the hours leading up to opening night. As an actor, she’s always trying to connect with the audience and this will be a novel way to build that relationship before a show.

“It’s going to take some of the nerves out of it,” she said. “You’re seeing your audience before they’re seeing you. I think that if we’re having fun beforehand, that’ll just make them more excited to be there when the show is going on. The audience plays such a big part of how a show runs on any given night. An excited and happy and intrigued audience is so amazing to perform for.”

“Annie Get Your Gun” is based on the 1946 classic by Irving Berlin and the book by Dorothy Fields and Herbert Fields. It tells a fictionalized version of the life of Oakley (1860-1926) and her love interest, Frank Butler, who toured the world as sharpshooters in Buffalo Bill’s Wild West. Iconic songs including “There’s No Business Like Show Business” and “Anything You Can Do” make this production a familiar and family-friendly event for audiences of all ages.

Wild West variety shows of the sort depicted in “Annie Get Your Gun” were extremely popular forms of entertainment in the time when SUNY Cortland was founded as the Cortland Normal School in 1868.

Senior musical theatre major Matt Henningsen of East Northport, N.Y., plays Butler. Part of his challenge as an actor has been incorporating Butler’s Western dialect and cowboy persona into his performance. Most of all, Butler (1847-1926) was one of the era’s preeminent showmen, so trying to reel in prospective theatre-goers among SUNY Cortland students, faculty and staff before the show fits in with what Butler did during his life.

“It all comes together nicely because of the 150th anniversary and the time period of the show and the fact that right outside of the theatre we’re having this giant extravaganza with fireworks and all this crazy stuff going on,” Henningsen said. “We get to sing there and then lead back into here, when hopefully the crowd follows us in here and they’ll come back into our world and our show.”

For Earle, playing Oakley is about capturing the spirit of a woman who is excelling in a field dominated by men.

“She’s so cool and she’s so empowering,” Earle said.

As legend has it, the diminutive teenager challenged Butler to a shooting contest when Butler’s traveling show arrived in Cincinnati, near Oakley’s Ohio home. Oakley won, the two fell in love and married and spent the next four decades showcasing their marksmanship skills across the globe.

The musical fictionalizes their relationship, primarily the battle of egos as Oakley continues to best Butler professionally. Issues raised in the musical remain relevant to women in the workplace today.

“She’s not normal and I think she knows that,” Earle said. “I think she’s not afraid of it. Especially the dynamic between her and Frank. He has more problems with her being better than him than she does. She just accepts it and knows that it’s fact, that she’s the best.”

“Annie Get Your Gun” will be performed at 7:30 p.m. on Saturday, Oct. 6, Thursday, Oct. 11 and Friday, Oct. 12. Matinee shows at 2 p.m. will take place on Sunday, Oct. 7 and Saturday, Oct. 13. Tickets are $19 for adults, $16 for senior citizens and SUNY Cortland faculty and staff, $14 for SUNY Cortland alumni and $10 for current students. A subscription option of $56 is available for those looking to buy tickets to all four SUNY Cortland productions for the 2018-19 academic year. Tickets and more information are available at Cortland.edu/boxoffice.