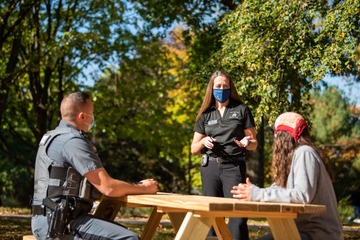 She got her start as an officer at SUNY Purchase before moving to SUNY New Paltz and climbing the ranks from officer to investigator and then chief.

Mary Sullivan Ritayik ’97 knows what it’s like to be a SUNY student, too, having majored in sociology at SUNY Cortland.

She will be the first female to hold the title of statewide commissioner and is the first to rise through the ranks of officer, investigator, chief and commissioner within the SUNY system.

Having been a SUNY Cortland student has shaped how she’s chosen to serve other students through her multiple roles in the University Police.

“I loved my college experience. It was the best four years of my life,” Ritayik said. “It was just a great period of my life and working in UPD allowed me to still stay connected to students who are going through that same thing.

“It’s about making it a good experience for students. I liked the environment and I liked the purpose and the foundation underneath it. You’re not just there to enforce the law, you’re there to be a role model.”

Ritayik, who starts in her role as part of the chancellor’s leadership team on July 6, was drawn to an academic interest in sociology early in her college career. She recalls classes with Professor Herbert Haines and the late Frank Hearn as being engaging and challenging. Cortland’s Sociology/Anthropology Department has since created a baccalaureate degree in criminology track for others aspiring to a career in law enforcement. The major is among the university’s most popular.

A minor in history and an internship with Big Brothers Big Sisters of America gave Ritayik a well-rounded experience.

“You were on your own and you determined your fate with getting to class and passing and getting through your classes,” she said. “I really learned my work ethic there. You’ll see the results if you work hard, so I really pushed through.”

After graduating, Ritayik attended the Westchester County Police Academy. Scoring well on civil service exams, she attempted to join the New York State Police at first but failed the push-up portion of the physical ability test. Ritayik soon found another opportunity as an officer with SUNY Purchase in 1998.

She transferred to SUNY New Paltz in 2000, was promoted to police investigator in 2003 and became deputy chief in 2013. On January 1, 2019, she was appointed chief of university police at New Paltz.

Ritayik has created a number of initiatives related to her strong belief in community policing and strengthening ties between officers, the campus community and the greater New Paltz area.

"Commissioner Ritayik has demonstrated throughout her career a commitment to forging a strong relationship between university police and the college community,” said SUNY Chancellor Jim Malatras. “She has proven to be a tremendous asset to SUNY New Paltz, building trust within the community by engaging students, faculty and staff regularly on issues that matter most. Mary is also a trailblazer for women in law enforcement, and well respected by colleagues and the community. We are excited to have her join our team as we continue to meet the expectations of our students for a safe environment on our campuses."

She hopes to continue expanding opportunities throughout the SUNY system in her role as statewide commissioner, as well as addressing issues such as diversity and retention among the police departments on SUNY campuses.

Most of all, her goal is to continue to foster a safe and welcoming environment in which students can learn.

“Underneath it all, students are trying to forward their education and the faculty are teaching it,” she said. “It’s a unique environment to be a police officer. These are all young adults who are trying to learn and navigate the world. I like that connection and I’ve never left.

“Even though now I’m a little older than the students,” she laughed.

As an officer, Ritayik always strove to be a role model for her coworkers and students alike. She’s hoping that her promotion to commissioner inspires young women to push for leadership roles, whether it be in policing or other lines of work.

“It’s a great feeling when you can break a glass ceiling and be recognized by your fellow officers and chiefs based on merit,” she said. “Yes, I am female, but I’m a chief first. I just happen to be female. I’m the commissioner now and I happen to be female.

“It’s about showing other people, other females and other diverse people, that you can do it. It hasn’t hit me yet. It’s an honor to be the first female commissioner. I’m glad to see women out there breaking glass ceilings and pulling up the women behind them because we can do this job. We may do it a little differently, but everybody has their own way of doing things.”

When Ritayik first arrived in Cortland as a first-year student in the fall of 1993, she could never have imagined where she’d wind up. Now, she’s leading 500 officers across SUNY’s state-operated campuses.

“I’m really sensitive to officer’s situations,” she said. “I would want anybody who’s going to be my boss or be in charge of something to know what it’s like on the midnight shift. I’ve worked the midnight shift. I worked Christmas Day. I worked New Year’s Eve on Y2K at Purchase. It was the biggest New Year’s Eve you could ever have in your lifetime and I worked it because I was the low person on the totem pole. I think it’s really important to never forget where you came from.”