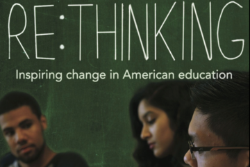 
The Blackbird Film Festival kicks off on Thursday, April 19 at SUNY Cortland with a locally-produced documentary that challenges viewers to consider a different approach to education.

“Re:Thinking” will be shown at 6:30 p.m. in Sperry Center, Room 105. The film explores efforts in four school districts to shift focus from teaching children WHAT to think to teaching them HOW to think.  It continues a conversation among local educators started by the Francis J. Cheney Educational Leadership Summer Institute at SUNY Cortland in the fall of 2017.

The screening, like all Blackbird events, is free and open to the public. Local school educators are encouraged to attend.

The film was directed and produced by Deborah C. Hoard, president of the Ithaca-based PhotoSynthesis Productions. Based on the findings of the husband-and-wife team of Derek and Laura Cabrera, who head the Cabrera Research Lab at Cornell University, “Re:Thinking” captures the voice of students, teachers, administrators and researchers and shows what can happen when they work in concert.

SUNY Cortland’s Christopher Manaseri, assistant professor in the Foundations and Social Advocacy Department, and Holly Manaseri, associate professor in the same department, view the screening of “Re:Thinking” as an extension of the dialogue that originated at the 2017 Educational Leadership Summer Institute. The College invited Will Richardson, an influential author in the field of school leadership, to speak to interns and 120 area school leaders on the challenges facing tomorrow’s administrators. In the fall, many of those leaders returned for another meeting to further the discussion.

“This film is showcasing educational environments and schools and leaders and teachers talking about the need to have different approaches that are personalized and responsive and flexible,” said Holly Manaseri, who serves as program coordinator of the Educational Leadership Program.

“It’s about helping students be creative, not constrained,” she said. “We want this to be a continuous conversation in the Central New York region about teaching and leadership and what we can be doing jointly, from higher ed to our K-12 partners, to think about teacher and leadership preparation and how schools can be responsive for students.”

Holly Manaseri is particularly interested to hear from teachers and administrators who have implemented new methods in their classrooms in schools based on the Educational Leadership Program’s summer and fall sessions. She also is curious to hear their reaction to the similar ideas that are posed in “Re:Thinking.”

“We’re engaged with the community and we’re engaged with our K-12 partners and this is another example of how we can use that platform to bring people together for these kinds of conversations,” Holly Manaseri said.

The event is sponsored by the School of Education and the Educational Leadership Program in the Foundations and Social Advocacy Department.

The Blackbird Film Festival features 120 films made by student and independent filmmakers. This year, more than half of the films selected are directed by women. All festival events are free and open to the public.