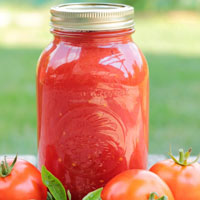 
Don’t tell any relatives from the old country, but SUNY Cortland’s dining services provider will introduce its own tomato sauce this fall made almost entirely of local ingredients, including more than two tons of organic tomatoes grown in Central New York.

Auxiliary Services Corporation (ASC) has agreed to purchase one acre of farmable land in Preble, N.Y., from Main Street Farms in Homer, N.Y., which should produce roughly 5,000 pounds of Roma tomatoes. A limited supply of sauce — approximately 500 gallons — will be available in Neubig Hall, SUNY Cortland’s residential dining facility, to kick off the 2014-15 academic year.

“This sauce is going to be a pure New York state product, with almost everything coming from right here in Cortland County,” said William McNamara, the director of dining services for ASC. “If we’re going to do it, we want to do it the right way and we want to support the local economy.”

Everything from the tomatoes to the onions to the herbs and spices used in the sauce will be grown locally, McNamara said.

“With this, we know where the food is coming from and we’re going to get a fresher, more organic product,” McNamara said. “It’s coming right from the vine to us.”

ASC traditionally purchases bulk sauce, made from California tomatoes, from its food supply vendor. Not only will the special edition sauce pump dollars into a nearby business, the final product will taste fresher, McNamara said.

A local product, however, also means a higher cost. ASC will pay Main Street Farms approximately $5,000 to farm one acre of land, which should allow for the cultivation of roughly 4,000 tomato plants. Assuming 500 gallons of sauce come from that crop, each gallon will cost $9.71 in tomatoes alone.

ASC pays its vendor roughly $7 per gallon of traditional sauce, and that number includes both labor and containers. As part of a return-to-work employee orientation in August, ASC will turn the sauce making process into a team building exercise to prepare the new product.

“People often ask: ‘How come you’re not buying more local?’” McNamara said. “Well, if we bought everything local, people probably wouldn’t be able to afford a meal plan because it would cost too much.”

The limited edition sauce should account for 5 percent of ASC’s annual supply, and McNamara estimated it would last through September. He pointed out that ASC hasn’t raised the price of student meal plans in four years while finding ways to increase efficiency and reduce waste.

“Our challenge always is balancing the cost of a meal plan and keeping the value there while doing the right thing,” he said.

This latest work project supports Main Street Farms, an urban aquaponics farm and plant nursery that launched in 2011. The farm grows organic products both in water and soil, using aquaponics techniques — a combination of aquaculture and hydroponics — to raise tilapia in tanks. The fish are fed and their waste-water is used to fertilize plants. The flora, in turn, clean the water for the fish in a closed loop cycle.

“They’re environmentally friendly and they’re part of our community,” McNamara said. “They’re able to do what we want and we believe in everything that they stand for.”

The tomato sauce experiment is a one-year trial run for ASC, with the hope to continue in the future.

“Obviously, the more you purchase of something, the cheaper the price,” McNamara said. “Hopefully this is the start.

“We’re looking at this as the potential start of a good partnership.”