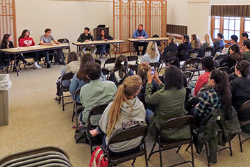 
SUNY Cortland students have gathered through Webex twice so far to discuss the U.S. presidential debates.

The student discussions, two of four originally scheduled prior to the election, were organized by John Suarez, who directs the university’s Institute for Civic Engagement.

A discussion to analyze the Thursday, Oct. 22 presidential debate is scheduled for Monday, Oct. 26. The session is from 7 p.m. to 8 p.m.

A fourth planned event for Monday, Oct. 19, to review the Thursday, Oct. 15 presidential debate results, was cancelled after the debate was converted by the candidates into separate town hall style meetings, virtual in the case of Biden.

To receive a Webex meeting invitation to the Oct. 26 discussion, contact Suarez.

“We are all learning,” Suarez said. “The most important goal is to give students the skill of having civil and productive conversations."

With Suarez moderating, in the first meeting on Oct. 26 participants discussed and made insights on complex current issues as well as the debate itself.

The group agreed that the first presidential debate failed to touch on several important issues. Nonetheless, participants discussed COVID-19, climate change, the economy and the “defund the police” movement. While political views differed, students had respectful interactions with each other and educated themselves on current issues.

“The discussion was very helpful in understanding points of view from people on the ‘other side’,” said Hannah Nyhan, a first-year childhood education major from Canandaigua, N.Y.

As for any campus community members planning not to vote, Cortland student George Brown, a first-year student majoring in sport management, has something for them to keep in mind.

“Students thinking about not voting should consider that their silence is loud and their silence at the ballot rests for eternity.”

CAPTION: In the above left image above, before COVID-19, the Institute for Civic Engagement Action Team interns and Student Government Association club representatives take part in an environmental issues debate during 2019 in Old Main ( photo by John Suarez).