College, City to Benefit from Bicycle and Pedestrian Connections 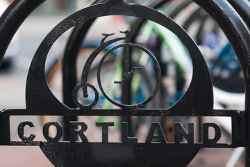 
The connections between the City of Cortland and the SUNY Cortland campus will continue to grow thanks to an award from the state’s Regional Economic Development Council competition.

Cortland will receive $2 million to construct new pedestrian and bicycle connections from SUNY Cortland to Yaman Park, located on Kennedy Parkway, just under two miles away.

“We are a very green and very health-conscious campus that is proud to be part of a green and health-conscious community,” SUNY Cortland President Erik Bitterbaum said. “This project will offer an environmentally clean transportation alternative,  help improve a major gateway and provide a healthy recreation option for both students and city residents.”

The new bicycle lanes will follow Clinton Avenue and River Street and link key points in the city, from SUNY Cortland to downtown to Exit 11 on I-81. Work will include complete reconstruction of a one-mile section of Clinton Avenue, including dual bike lanes, new sidewalks, planted medians, LED lighting and new pavement and landscaping.

The project supports complementary initiatives by both SUNY Cortland and the city.

Earlier this fall, the City of Cortland was awarded $10 million as part of the state’s Downtown Revitalization Initiative. The City is planning a variety of development projects to grow business, entertainment and infrastructure improvements through this award.

SUNY Cortland was named a Bicycle Friendly University by the League of American Bicyclists in November. The College’s Community Bike Project has provided bicycles to the campus community since it was created in 2003. Currently, Outdoor Pursuits lends its collection of 70 bicycles to students on a free, weekly rental system.

The City of Cortland was recently named one of the top 10 U.S. small cities for new college graduates by OnlineDegrees.com. Cortland ranked No. 20 — and was the only community in New York — to be named on Safewise’s list of the 30 safest College Towns in America.