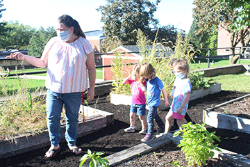 
An edible forest garden may begin reaching for the sky next spring on the grassy slope between SUNY Cortland’s Memorial Library and Van Hoesen Hall.

So what goes into an edible forest garden?

It’s a garden where campus community members can relax, wander, sample flowers or nutritious produce or roll up their sleeves and engage in some healthy and helpful maintenance of the garden beds.

“The idea is this new garden replicates a good forest ecosystem,” said Klein, who is spearheading the project on the Sustainability Committee along with:

“You have got different plants at different levels and they cooperate with and help each other,” Klein explained.

That doesn’t begin to describe what the new garden will look like or contain. But the campus community has begun to draw up a more detailed plan.

The committee held an “Edible Forest Garden Charrette” on Nov. 19 in the Corey Union Fireplace Lounge, an event that architects might describe as a brain-storming session.

The meeting was an opportunity to come together as a SUNY Cortland community while sharing an interest in biology, diversity, sustainability or wholesome recreation.

At the meeting, Chandler first provided some background and explained the components of an edible forest garden. Next, small groups each sketched out on paper their vision for a potential garden layout. The whole group then reconvened to share those various renderings, looking for the common elements to include in one final blueprint.

“The idea is you bring all the constituents together to see what they would want in their forest garden,” Klein said of the recent charrette.

“Because it should be a community space in addition to being a garden. While you’re talking about the diversity of plants we’re going to have there, you also need to respect the diversity of people. So there will be opportunities for people to mingle there. There will be some seating areas, we’re hoping to maybe have a little classroom space in there. Then, maybe an area for some art installations. So it becomes as much a community space as an edible forest garden.”

Edible forest gardens do require some thoughtful planning, according to Klein. For example, it’s smart to avoid vines such as those in the Morning Glory family that tend to overshadow their host. Conversely, pea vines works in cooperation with their host.

“Each plant usually has multiple purposes for being there. So an apple tree would provide apples to folks, but would also offer some shade for shade-loving plants that you might want to plant underneath,” Klein said. “The tree also might offer some structure for you to grow vines underneath. And the vines might put nitrogen back into the soil, which will help the apple tree. They all kind of work together and help each other out.”

Currently, a much smaller Model Garden, with its nine square wooden boxes of soil brimming with flowers and vegetables in season, is positioned at the top of where the hoped-for future garden will begin. The edible forest garden will be about three to four times the size of its Model Garden neighbor.

“Basically it’s more natural with less boundaries,” Chandler said. “So it’s going to look more like a forest than a planned-out garden. We’re going to have a place for everything. That will probably include trees, bushes, regular garden plants probably as well. But it will be set up more as a natural looking environment.”

Much of the planned bed will contain perennial greenery that can survive the upstate winters.

“Whereas most of the model garden is annual, that is they have to be prepped and planted each year, this garden will be planted once and taken care of, with some annuals, some of which might self-seed,” Klein said.

The Sustainability Committee members became inspired to create this kind of garden by a guest speaker on campus last spring, Jonathan Bates, an Ithaca resident who co-authored, with Eric Toensmeier, Paradise Lot: Two Plant Geeks, One-Tenth of an Acre, and the Making of an Edible Garden Oasis in the City.

“They actually bought a duplex together in Massachusetts and turned a city lot that was pretty much abandoned into an edible food oasis,” Klein said.

“Madison hung around and showed a lot of interest in working on this project and that’s why she’s involved,” she said.

Chandler added, “I won’t be here when this comes to be constructed but hopefully I will find someone else to take over.”

The cost for mulch and saplings and perennials is covered, between the volunteers and the ongoing support that Facilities Operations and Services has shown, Klein said. What’s needed is enthusiastic volunteers.

“We hope to involve people from the SUNY Cortland Child Care Center quite a bit because we think it would be a good creative space for the kids to get involved,” Klein said.

To volunteer to become involved in building or maintaining the garden, contact the Sustainability Office in Cornish Hall, Room 1314, or email sustainability@cortland.edu.