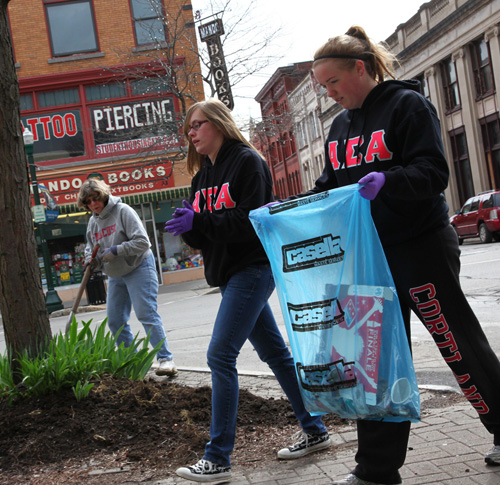 
In response to the unacceptable behavior exhibited during Cortaca weekend, President Erik J. Bitterbaum and Cortland Mayor Brian Tobin have created a joint commission to develop a plan to prevent it from ever happening again.

The 19-member commission, endorsed unanimously by the Cortland Common Council Tuesday, includes representatives of city government, the college, the community and the student body. It will be co-chaired by former Cortland mayor and SUNY Cortland College Council member Bruce Tytler M ’88, CAS ’05 and SUNY Cortland Vice President for Institutional Advancement Kimberly Pietro. The task force hopes to begin its work next week.

The commission will seek input and ideas from anyone with constructive thoughts on the situation. Members will then recommend a multi-pronged, long-term approach to problem behavior in the community. The group will make its recommendations to both the College administration and city government.

All options are on the table, and President Bitterbaum said he is committed to stopping this type of destructive behavior.

In addition to Tytler and Pietro, committee members, are:

Also on Tuesday, President Bitterbaum sent an email message to all SUNY Cortland students, sharing his disappointment and letting them know that disrespectful and destructive behavior will not be tolerated. This is the text of his message:

As president of SUNY Cortland, I was filled with happiness and pride after our football team’s last-minute victory over Ithaca College this weekend to take the Cortaca Jug for an unprecedented fourth consecutive year.  Those feelings, however, quickly turned to disbelief as I returned to Cortland to find the streets filled with our students behaving in shockingly unacceptable ways.

I send this message deeply disappointed and fully committed to making sure the behavior of this past weekend is never repeated in the future.

The disrespect for the local community shown on Saturday was unacceptable.  The destruction caused by some students and their guests was simply deplorable. And the potentially dangerous situations created for yourselves and for others defies understanding. This type of blatant disregard for the welfare of others cannot, and will not, be tolerated. Every possible step will be taken to fully prosecute those who have breached the law, through both the city court system and the campus student conduct system.

I have joined with city officials to create a task force to assess these types of unruly celebrations moving forward. I am confident that thoughtful input from both sides will result in a series of measures that will prevent this type of activity from ever happening again.  Whatever course we embark upon, student input and support will be critical to our success.

I take great pride in telling people that SUNY Cortland is an institution that defines excellence, with students whose presence in the community is an asset. Over the last several days, however, I have shared the embarrassment felt by our alumni, our faculty and the vast majority of SUNY Cortland students over the unacceptable behavior of the weekend. Our reputation is the same reputation that will eventually carry you into your new careers as graduates. It is in your interest to work together with us to make sure this kind of ugliness does not publicly define your school.