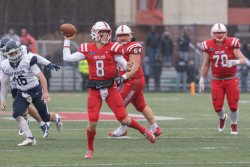 
It was a very successful fall season for SUNY Cortland’s varsity athletic teams. Here are some of the highlights from Red Dragons student-athletes and coaches:

The season continues for SUNY Cortland’s football team on Saturday as it hosts Rensselaer Polytechnic Institute in the second round of the NCAA Division III tournament at noon at the Stadium Complex.

The Red Dragons defeated Springfield, 26-21, in the opening round of the NCAA tournament on Nov. 20.

Field hockey finished the 2021 season with a 16-3 record after a 2-1 overtime loss to Ohio Wesleyan in the first round of the NCAA Division III tournament.

Women’s golf closed the fall portion of its season by winning the team title at the Nazareth Invitational on Oct. 10. Freshman Paige Cerminaro won the tournament by six strokes.

Cerminaro was the runner-up – and freshman Claudia Winterberg was fourth – as Cortland won the Williams College Women’s Golf Fall Invitational on Oct. 3.

The men’s soccer team finished tied for ninth nationally with a record of 18-3-1 after its season ended with a 4-1 loss to Amherst in the third round of the NCAA Division III tournament on Nov. 20.

Seven Cortland players were named to the All-SUNYAC team and coaches Steve Axtell, Sean Streb and Drew Francisco were picked as the conference’s Coaching Staff of the Year.

The women’s soccer team went 10-5-3 and saw its season end in a 1-0 loss to SUNY Geneseo in the SUNYAC championship game.

The Red Dragons were double winners, with both the men’s and women’s teams placing first at a dual meet at Buffalo State on Nov. 13.

Senior diver Taylor Williams was named the SUNYAC Women’s Diver of the Week on Nov. 9. Williams was second in 1-meter diving and third in 3-meter diving during a dual meet at Ithaca College to open the season.

The swimming and diving season resumes at the Cortland Snowflurries Invitational on Dec. 3 and 4.

The women’s tennis team completed the fall portion of its schedule with a 5-3 record, including a 4-1 mark in SUNYAC play. The season will resume in April.

Junior Abby Madigan was named SUNYAC Singles Player of the Week in September after winning 6-0, 6-0 in a non-league match at Alfred University.

Volleyball finished the season tied for 17th in the nation with a record of 27-4 following a loss to Tufts in the second round of the NCAA Division III playoffs. Cortland had defeated Geneseo in the SUNYAC finals and Merchant Marine in the opening round of the NCAA tournament.

For the latest on SUNY Cortland athletics, visit CortlandRedDragons.com.