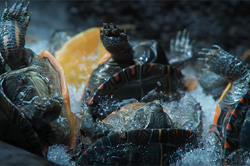 They didn’t travel to Raquette Lake in the remote Adirondack wilderness to document the amazing habits of polar bears or penguins. They weren’t after beluga whales, elephant seals, Siberian tigers or any of the other exotic creatures featured in the recently released trailer.

They were filming painted turtles, one of the most common and familiar turtle species in North America.

Because when the weather gets cold, these reptiles vanish from sight and do something remarkable.

Painted turtles have a unique physical makeup that lets them spend the winter beneath the lake’s ice without breathing for three or four months. Unlike other turtle species, they hatch in the fall and overwinter in their nest, surviving the bitter cold before emerging in the spring.

“I was fortunate enough to see some of the footage as it was filmed, said Rhonda Pitoniak ’01, M ’16, director of SUNY Cortland’s Adirondack facility, where many students, faculty, staff and alumni experience nature’s wonders each day.

“The crew would send videos daily to the headquarters to be sure they were capturing what the BBC wanted.  Even though it was a two- to three-second snippet on the trailer, I was thrilled to see the turtles, knowing they had been here. I look forward to seeing the show in its entirety.”

The Parks Family Outdoor Center was the perfect place to film that process, Pitoniak said. But it took a lucky bit of networking from alum Mike Reid ’03, a biologist and project manager with the New York City Department of Environmental Protection, for the BBC to find it.

According to Pitoniak, Reid was at his daughter’s play rehearsal when he met another parent, Patrick Baker, a physiological ecologist who teaches at West Point. They soon started talking.

"Patrick asked Mike if he knew of a place in the Adirondacks where some filming of turtles could be done,” Pitoniak said. “Patrick did his Ph.D. research on painted turtles and was seen as one of the most knowledgeable on the subject. The BBC had contacted Patrick, which is why he was looking for a place to shoot.”

Reid then pointed Baker in the right direction. Much of the Adirondacks is state owned and designated “Forever Wild,” making filming or other commercial activity difficult. But SUNY Cortland had accessible land in the area with the waterfrontage and forest the BBC needed.

Despite the ideal conditions, filming was difficult. Pitoniak said heavy loads of equipment were used to record the turtles, and that drone shots were taken of the lake and surrounding terrain.

“The crew had to wait for or help create specific light opportunities to capture the quality of film needed for this kind of program. I think one thing you will notice is the amazing clarity of the film shot,” Pitoniak said.

Prior to the film crew arriving, there was more than a year of conversations and emails, according to Pitoniak. The BBC wanted to ensure the university’s facility and property were the right look and fit for the BBC’s needs. Due to that and a COVID delay, initial contact was made in March of 2020 but onsite filming didn’t take place until April 2021.

Pitoniak said the film crew was a pleasure to work with. Most of all, she’s happy that it adds to the long list of ways SUNY Cortland encourages a commitment to ecology, sustainability and the study of biology.

“The groups that visit our facilities are so varied in their purpose for their visit. Alumni are here on vacation; college programs range from science education to history to community building and beyond. Our message is slightly different for each group, but one of the main goals is to get folks to allow themselves to be fully present.”