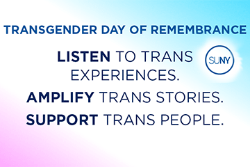 
Last year, the transgender community marked a terrible national milestone as 44 transgender or gender non-conforming people were killed. At the time, it was the highest annual number of violent deaths since the Human Rights Campaign began tracking the trend in 2013.

On Nov. 18, the SUNY Cortland campus community were made aware of an even worse number. With more than a month left in 2021, 45 transgender individuals have been killed in the U.S.

And those are just the transgender homicides we’re aware of. The Human Rights Campaign notes that law enforcement agencies don’t always report such deaths accurately or honor the deceased’s gender identity, making it very difficult to learn about all the victims.

Members of the SUNY Cortland community participated in a late afternoon vigil for this year’s victims on Nov. 18 in front of Corey Union. The official Transgender Day of Remembrance was Nov. 20.

The ceremony featured an online slideshow of pictures of those 45 people who have been killed, which is still available. Each includes an embedded link to their individual life stories, as told by those who had loved and befriended them. The stories linked to in this presentation were created by the Human Rights Campaign, the nation’s largest LGBTQ advocacy group.

At the vigil, campus community members read names of the people who lost their lives, explained Kristine Newhall, an associate professor of kinesiology and a Transgender Day of Remembrance Subcommittee member for SUNY Cortland’s Sexual Orientation, Gender Identity and Expression (SOGIE) Committee. SOGIE is dedicated to fostering a safe and positive environment for the LBGTQIAP communities at SUNY Cortland.

“One of the issues we have discussed in SOGIE is the need for people to recognize that the violence against trans people is disproportionately against people of color,” Newhall said.

As microcosms of the country as a whole, college campuses are grappling with violence against transgender and non-gender conforming campus community members.

“I know from my own research and work that there’s now a very active backlash in many states against transgender people generally,” Newhall said.

“The violence often takes the form of micro-aggressions, which aren’t any less valid,” Newhall said. “What we see is people being told they’re in the wrong bathroom. Having the wrong names used, having the wrong pronouns used.

“While we’re working on those things as a campus community, and we’ve started initiatives and trainings and things like that, it doesn’t mean that this doesn’t still happen.”

Transgender Day of Remembrance was started in 1999 by transgender advocate Gwendolyn Ann Smith as a vigil to honor the memory of Rita Hester, a transgender woman who was killed in 1998. The vigil commemorated all  transgender people lost to violence since Rita Hester's death in 1998. It has become an annual tradition.

“Transgender Day of Remembrance seeks to highlight the losses we face due to anti-transgender bigotry and violence,” Smith wrote at the time. “I am no stranger to the need to fight for our rights, and the right to simply exist is first and foremost. With so many seeking to erase transgender people — sometimes in the most brutal ways possible — it is vitally important that those we lose are remembered and that we continue to fight for justice.”

SOGIE’s Transgender Day of Remembrance Subcommittee also recognized the activism and advocacy of the Anti-Violence Project, which works to end violence against LGBTQ and HIV-affected persons, and the Human Rights Campaign.