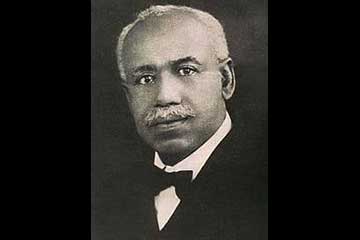 
SUNY Cortland will open Black History Month by formally proclaiming its inaugural Abraham Lincoln DeMond 1889 Day, honoring a groundbreaking graduate and enshrining his legacy to the university and the United States.

DeMond, who became Cortland’s first African American alum at a time when prejudicial policies and segregation were enforced across much of the United States, will be honored on campus on Feb. 1 in what organizers intend to be an annual event.

DeMond, born in Seneca, N.Y., attended the Cortland Normal School — the institution later to become SUNY Cortland.  He went on to become a politically active pastor, and delivered an influential address on African American rights from the Dexter Avenue Baptist Church in Montgomery, Ala., the same church from which Martin Luther King Jr. helped launch the civil rights movement

In 2019, the university’s chapter of the W.E.B. Du Bois Honor Society was named for DeMond. The idea of creating a special DeMond Day was developed and pushed into action by a current student: Tatum Pittman.

“I wanted to remind everyone of the power this one Black man had and the influence it carried, and hopefully it will inspire more students of color or students in general,” she said.

Pittman, a senior adolescence education: English major from Poughkeepsie, N.Y., is the director of diversity, equity and inclusion for the Student Government Association, and has been treasurer of the Student Alumni Association. She is enrolled in Cortland’s Urban Recruitment of Educators program, which prepares students committed to teaching in high-needs schools.

The event honoring DeMond and the official start of SUNY Cortland’s Black History Month celebration begins at 6 p.m. on Wednesday, Feb. 1, in the Corey Union Function Room. In future years, DeMond Day will be used to honor other African American alumni.

Speakers will include Pittman, Ernest Logan ’73, president emeritus of the American Federation of School Administrators and Cortland College Foundation board member, who will deliver the keynote address, Lorraine Lopez-Janove, SUNY Cortland’s chief diversity and inclusion officer, and College President Erik J. Bitterbaum. The SUNY Cortland Gospel Choir will perform “Lift Every Voice and Sing,” often referred to as the “Black National Anthem.” Daniel Walker ’06, president of the SUNY Cortland Alumni Association, and a representative from State Senator Lea Webb’s office, also will attend. Webb agreed to write a proclamation honoring the day and its importance to the campus.

Lopez-Janove attributed Pittman’s dedication and passion as the main driving force behind the success of DeMond Day. She noted that it puts an important focus on the SUNY system’s ongoing goal of racial diversity and inclusiveness.

“It’s not something that’s just happening now, it’s something that’s been happening for a while,” Lopez-Janove said. “It highlights the commitment that SUNY has — and that African American students see Cortland as a place they can come to and accomplish their educational goals. As a yearly event, it visually shows students, staff, faculty and the community that commitment.”

As important as memorializing DeMond’s time in Cortland will be remembering him as a talented, ambitious man whose accomplishments reached far beyond New York state. After graduation, DeMond studied theology at Howard University in Washington, D.C., and became pastor of Dexter Avenue Baptist Church. On Jan. 1, 1900, he delivered an oration, The Negro Element in American Life, that described the achievements of African Americans and called for them to given full rights as American citizens. It was published by the Alabama Printing Company and distributed to the public

A glass case in Corey Union will display items documenting DeMond’s life, including a portrait of DeMond with his graduation year. Pittman contacted Stephen Clark, assistant professor in the Art and Art History Department, who agreed to paint the portrait. The case also will house a letter DeMond wrote that was published in the local Cortland Standard newspaper, a copy of the oration he gave at Dexter Baptist Church, some of his published works from Cortland’s Young Men’s Debate Club and the proclamation from Lea Webb marking the inaugural day.

Pittman said that the idea for DeMond Day was inspired by a speech given by Bitterbaum last year commemorating Martin Luther King Jr. Day.

“The story President Bitterbaum gave … stayed with me because of the power it had and the pride it gave me to attend the same school as DeMond and also be working on and fighting the same fight as him,” Pittman said. “We have buildings named after old athletic directors, and old presidents, but it’s not often that we see a plaque with Abraham’s name on it, or even a statue.”

After having the original idea, Pittman worked on the event’s details with the help of other students, faculty and staff. She said that Lopez-Janove assisted with the event’s funding and coordination while Katrina Hodge, assistant director of Multicultural Life and Diversity and Cyrenius Fitzjohn, assistant chief diversity and inclusion officer, were her adult mentors.

Pittman credited Bitterbaum, the President’s Cabinet and Webb for additional help. She also met with the Diversity Board twice a week and her deputy, Calvin Barnett, provided his own assistance and ideas. The SUNY Cortland Alumni Association is funding the reception, has helped with marketing efforts and will present a proclamation honoring DeMond.

“I hope Abraham Lincoln DeMond Day opens up a new door of recognition for the Black community on campus,” Pittman said. “I also hope it allows us to understand our history at SUNY Cortland and the importance of the fight for equality and how, like President Bitterbaum stated in his latest message to the campus, that fight must continue today in our own students.”

Registration is not necessary but appreciated. Register online or call Alumni Engagement at 607-753-2516.

Contact Alumni Engagement at 607-753-2516 for any questions regarding the event.