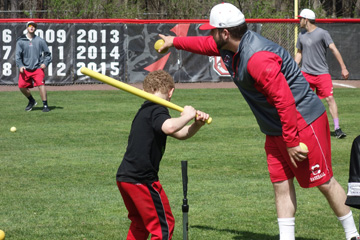 
SUNY Cortland’s nationally top-ranked baseball team enters this week’s NCAA Division III playoffs on the strength of a 16-game winning streak — the result of timely hitting, gritty individual pitching performances and a winning culture that has established the highest of expectations within the program.

And still, although the defending national champion Red Dragons bring a disciplined, workmanlike approach each and every time they take the field, the squad understands the importance of “doing well by doing good” off of it.

That’s why the team’s players led the inaugural “Fun on the Field” event for 28 local boys on April 30. The special two-hour clinic, which was supported by the YWCA’s Bridges for Kids and Cortland Prevention Resources Compass mentoring programs, involved student-athletes teaching the fundamentals of their sport while also leading other fun activities.

In a larger sense, the event was intended to address a local need for male mentors in the lives of young boys.

“Helping the boys gain confidence in their skills was great, but seeing them smile and have fun was even better,” said Austin Clock, a senior captain who helped organize the event with classmate and fellow captain Keith Andrews. “We really wanted to do something to help out the mentoring program, but we never anticipated we’d have such a great time ourselves.”

Of course, it also proved to be a memorable day for the young participants themselves, who ranged in grade level from kindergarten to 8th grade. The College supplied bus transportation from the YWCA, and even that short trip proved to be an experience in itself.

“They loved the red dragon on the bus and thought it was quite the privilege to be riding it,” said Sara Earl, director of the YWCA’s Bridges for Kids program. “So many families do not have yards and the fact that the boys could run and be active was so important. More crucial than the physical activity, however, was the opportunity for the young boys to interact with positive male role models.”

The “Fun on the Field” event took place just a few hours before the College’s baseball team knocked off St. Lawrence University at Wallace Field. Since that time, the Red Dragons captured both the regular season and postseason State University of New York Athletic Conference (SUNYAC) titles.

The team now hosts a six-team regional at Falcon Park in Auburn, N.Y., starting Wednesday, May 18 — the next step in its national title defense.

“Many of the young boys had never held a baseball bat before,” Earl said, speaking to the significance of learning from some of the best players in the nation. “Watching these college males take the time to patiently hold the bat with the boys and teach them to swing, and then to see the big grin on the boys’ faces … you just had to smile and say, ‘Wow, this is life changing.’”