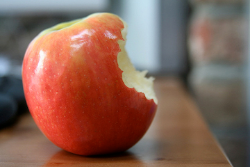 
Do you know what healthy sounds like? At noon on Thursday, Oct. 20, listen closely.

You might just hear the refreshing crunch of a million pairs of teeth sinking into fresh, New York apples.

Of course, it helps if you’re one of the people taking a chomp.

SUNY Cortland is one of 18 schools throughout the state committed to crunching into New York State apples that day to affirm their commitment to local food and healthy living.

The third annual New York Campus Crunch asks participants to bite into an apple at noon and help set a record for the “Most Participants in an Apple-Crunching Event” by encouraging more than a million crunches. The main collective crunch is scheduled for lunchtime, but late crunches are welcomed.

Anyone — student, employee, community member or friend — may participate simply by taking a bite out of an apple, snapping a selfie and posting it on social media with the hashtag #NYCampusCrunch.

To encourage participation, ASC will sponsor a special apple photo booth at both the Bistro and Neubig Hall, giving healthy eaters an opportunity to mug for selfies with their friends.

SUNY Cortland will host crunching events in all its dining areas, including Neubig, Bistro and the Hilltop food court. The activities will offer a variety of apples donated by apple-inspired culinary fare as giveaways and, at Hilltop, contest prizes.

Red Jacket Orchards in Geneva, N.Y. is donating complementary apples and fresh cider for the event in an effort to celebrate both the state’s local agriculture and healthy eating.

New York is the second-largest apple-producing state, averaging 29.5 million bushels of production annually. Because apples are grown locally, they help the College reduce its carbon footprint by avoiding lengthy, CO2-producing shipping and transportation.

They are also guaranteed fresh, flavorful and very healthy. Promoting local apple consumption is just one of the things ASC is doing to entice SUNY Cortland students to eat healthier. Their continued efforts helped make the College eligible for the national Healthier Campus Initiative, putting it on a course to become one of the healthiest campuses in the United States.

The Oct. 20 event is part of the Big Apple Crunch, a New York City-based initiative hosted by GrowNYC, Food Day, the New York City Office of Food Policy and the American Farmland Trust.

Since the Crunch began in 2012, hundreds of thousands of people in New York participate. The record was set in 2013 when approximately one million people crunched apples for the cause.