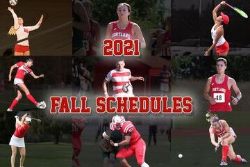 
The schedules have been released for the 2021 SUNY Cortland Athletics fall season. It has also been announced that the 2021 Cortaca Jug football game between Cortland and Ithaca has been moved from Ithaca to Cortland - the teams will play at the SUNY Cortland Stadium Complex on Saturday, Nov. 13, at noon. Ticket information will be announced at a later date. Due to the cancellation of the 2020 fall season, Ithaca and Cortland mutually agreed that the Red Dragons host this year's game, and that Ithaca will be the host in 2022.

Football begins its season Sept. 4 at Wittenberg in Ohio and its home opener will be Sept. 18 versus Buffalo State. The cross country teams will co-host a meet with SUNY-ESF on Sept. 4 at Dwyer Memorial Park in Preble, which is also the tentative site for the SUNYAC Championships in late October. The women's golf team opens its season Sept. 4-5 at the St. Lawrence Invitational.

Women's tennis begins the season with a home match Sept. 3 versus New Paltz. The tennis schedule this year features SUNYAC matches during both the fall and spring semesters, with the league postseason tournament scheduled for late April.