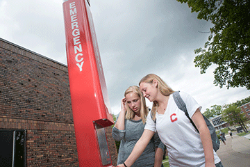 
During April, Sexual Assault Awareness Month, three national events promoted by the One Love Foundation and SUNY aim to raise understanding and promote engagement within the SUNY Cortland campus community.

The “Escalation Workshop” involves students watching a 45-minute film that depicts a typical college relationship that develops quickly into a toxic situation. The students will then engage in a 45-minute question-and-answer process.

The national One Love Foundation offers a number of educational tools like the “Escalation Workshop” to help participants recognize warning signs and help themselves or a loved one address relationship violence.

“Last year, One Love Foundation was trying to have all the campuses walk a ton of yards for Yeardley,” Pasquarello said. “And SUNY Cortland will certainly do that on another date (April 7). “But this year, SUNY is calling the ‘Escalation’ workshop the 5K, meaning it’s not a 5K race, but they want to make sure that during April, at least 5,000 students across SUNY are educated about relationship violence.”

The College’s Yards for Yeardley event on April 7 honors people like Yeardley Love, who on May 3, 2010, just three weeks before her graduation from the University of Virginia, was beaten to death by her ex-boyfriend. This year’s focus will be on getting 5,000 students across SUNY to become educated on what to do when they or a loved one is confronted by domestic violence, in an educational campaign called the SUNY One Love Healthy Relationships 5K.

“Yards for Yeardley is a well-established tradition that the students know is a fun event,” Pasquarello said. “But we want students to know why they are there. We want to take it on to the next level around dating violence prevention.

“It’s not just to ‘beat Oswego’ with yards but so they really understand why they are there. We want to continue to keep that fun tradition going and honor Yeardley around dating violence while increasing the educational engagement of the event.

“We opted not to go outdoors this year because it’s April in Central New York,” Pasquarello said. “Last year, that was just so much fun, but we had to dash indoors at the last moment.”

The It’s On Us Action Team, Title IX Office, Athletics, Residence Life and Housing and Student Government Association have teamed up to host this year’s Yards for Yeardley Event.

“We really see the strength in having these collaborations,” Pasquerello said. “We’re reaching more students.”

The “Behind the Post” workshop features a short film followed by discussion on how social media posts can have an effect on relationships and how these postings are perceived.

“‘Behind the Post’ is getting students to examine real life versus what people post online and how there can be a disconnect around relationship status,” Pasquarello said. “It’s really interesting.”

Additional “Escalation” and “Behind the Post” workshops will be scheduled in April and early May.

The events highlight the two weeks of daily activities during April that members of the campus community have planned aimed at making SUNY Cortland an exception to the sobering statistics facing college campuses nationwide: During their time in college, 1 in 5 women and 1 in 16 men are sexually attacked, 40 percent of survivors fear reprisal by their attacker and only 2 percent of incapacitated rape survivors report their assault.

One recently added event to the month is “Denim Day,” on Wednesday, April 24, an awareness-raising partnership between the YWCA Cortland Aid to Victims of Violence (AVV) and SUNY Cortland service learning project interns Lydia Colombo, Sonia Devora Vallejo, Monica Ferguson and Viktoria Kalmatskaya. Volunteers will give information at tables in the lower level lobby area of Corey Union.

“Denim Day” was started in 1999 in Los Angeles by the group Peace Over Violence after the 1998 overturning of a 1992 rape conviction in Italy, according to the student interns. The Italian Supreme Court threw out the conviction reasoning that the young girl was wearing tight jeans. The officials believed that because the jeans were so tight, she had to have helped to take them off, thereby giving consent. The next day, women in the Italian Parliament wore tight jeans to make a stand against the Supreme Court’s ruling.

“In honor of this case, Denim Day has been hosted on a Wednesday in April, which is Sexual Assault Awareness month,” wrote the four service learning volunteers to SUNY Cortland President Erik J. Bitterbaum. “We are asking for your support to recognize this day by wearing jeans. We are hoping that we can table for this event and allow faculty to get involved as well. We will provide stickers for faculty who wish to be involved.”

For more information on the “It’s On Us Action Team events during the first week of April, contact Pasquarello at 607-753-2263. For SAFER event details during the second week, contact club president Andreanna Whitaker.