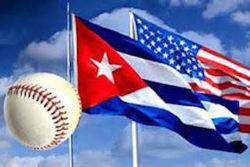 
Three successful international business executives who are currently pioneering opportunities in Cuba’s opening economy will share their experiences and insights during a first-of-its-kind symposium on U.S.-Cuban relations to be held on the SUNY Cortland campus in Cortland, N.Y.

The business panel of the SUNY Cortland – Caribbean Baseball Initiative (CBI) Cuba Symposium, scheduled for Thursday, April 28, will include:

Holwill is one of several retired U.S. ambassadors speaking at the event.

Former U.S. Ambassador to Turkey Marc Grossman, who served as the Under Secretary of State for Political Affairs – the State Department's third-ranking official – will lead the business panel. Ambassador Grossman, who also served as U.S. Special Representative for Afghanistan and Pakistan, is vice chairman of The Cohen Group, an international strategic advisory firm located in Washington, D.C.

Former U.S. Ambassador to Mexico, Venezuela and Zambia Jeffrey Davidow, currently senior counselor at the Cohen Group, will moderate a separate panel on recent developments in the bilateral relationship between the United States and Cuba. Ambassador Davidow headed the State Department’s efforts in Latin America as assistant secretary of state for western hemisphere affairs.

Former U.S. Defense Secretary and Senator William S. Cohen will headline the symposium as the keynote speaker. Secretary Cohen, a former member of both houses of Congress and a member of President Bill Clinton’s cabinet, is currently chairman and CEO of The Cohen Group.

“The recent thaw in relations between the United States and Cuba creates incredible opportunities for both American small businesses and well-established corporate enterprises,” SUNY Cortland President Erik J. Bitterbaum said. “Anyone thinking of establishing business connections in Cuba should hear what these experts have to share.”

The business panel is one of four conversations featured at the symposium, which will explore how various forms of diplomacy can be used to bridge the differences between Cuba and the United States. The other three panels will address recent political developments in the U.S.-Cuba relationship, academic opportunities and baseball diplomacy.

The symposium is co-sponsored by SUNY Cortland and the CBI, an organization seeking to promote goodwill and understanding between the U.S. and its Caribbean neighbors through a shared passion for the sport of baseball. Founded by managing general partner Lou Schwechheimer, a current minor-league baseball executive and owner, CBI has engaged with Cuban counterparts for more than a decade in an effort to build a baseball bridge between Cuba and the U.S.

Registration is open to the public. Speakers and event specifics will be published online as they are finalized by Symposium organizers and SUNY Cortland. Go to the event webpage for updated information.