Executive-in-Residence to speak on healthcare and politics 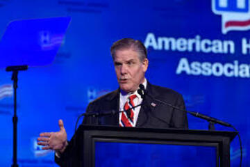 
Richard “Rick” Pollack ’77, president and chief executive officer of the American Hospital Association (AHA), works every day on behalf of nearly 5,000 hospitals across the country.

When the COVID-19 pandemic started spreading across the United States earlier this year, Pollack was a leading advocate for doctors, nurses and other hospital staff members, working to ensure a safe working environment for them.

Pollack was at the forefront of the respirator shortage crisis in April. He met with President Trump and hospital CEOs at the White House Rose Garden on April 14 to discuss the Dynamic Ventilator Reserve, an online equipment inventory managed by the AHA that allowed unused equipment to be moved to COVID-19 hotspots.

On Thursday, Oct. 8, Pollack will share his insight and experiences through a virtual Executive-in-Residence for students and faculty in the Economics, Health and Political Science departments.

As a SUNY Cortland student, Pollack, a political science major and communication studies minor, was involved with student government and the campus radio station, hosting a popular news and interview show called “Person to Person.”

After participating in a SUNY-wide internship program in Washington, D.C., he went on to work for Wisconsin congressman David Obey, who twice served as the influential chair of the House Appropriations Committee.