Athletic field to be renamed in honor of alum 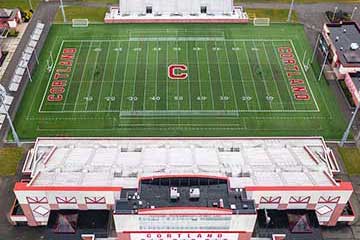 
The field in SUNY Cortland’s sports complex that hosts football and lacrosse will be getting a new name as part of an historic million-dollar gift from Chris Grady ’79 to the university in honor of his father.

Two decades after the stadium’s Red Field first opened, it will be renamed the James J. Grady ’50, M ’61 Field at SUNY Cortland Stadium Complex — or Grady Field for short.

Although the gift is being announced a little more than a week before the 2022 Cortaca Jug game in Yankee Stadium, a formal naming ceremony won’t take place until next season, when the Red Dragon football squad faces Utica College on Oct. 7, 2023.

For Chris Grady, there's no name better to be permanently identified with SUNY Cortland athletics than Jim Grady ’50 M ‘61, who played football as a quarterback for the Red Dragons.

“My father had a great college experience,” Chris said. “He went back for his master’s there and went back summers. Cortland represented his career. As he got older, we always talked about Cortland and Cortland sports teams.

“One year, toward the end of his life, he asked If I could apply for a C-Club membership for him. That stuck in my head. He ended up passing last year of COVID, but when he passed, I said to my wife, 'A donation to Cortland in his name would be way better for him. He’ll feel it wherever he is in heaven.' I think that is perfect for him.”

When today’s athletes walk onto Grady Field, they will be part of that tribute. The turf they play on represents the ideals that Chris says his father believed in: fair play, hard work, and appreciation of life. Chris said that one of Jim’s favorite sayings was, "To play the game is good, to win the game is better, but to love the game is best of all.”

It also will stand for the work ethic of a father who, Chris says, balanced raising a loving family with his wife, Pat (Mary Patricia), while working long hours to support seven kids. The dedication that drove Jim as a father also drove him as a man. He served in World War II, graduated college in three years, and inspired a generation as an educator, coach and athletic director at Wantagh High school on Long Island. He was honored as the winningest varsity high school baseball coach in New York state, and began a post-retirement career in Chris’ investment services company as a financial planner.

Chris’ brothers add to the family’s legacy at Cortland. Two, Michael and Jimmy, spent time on campus before transferring. A third brother, Joe Grady '90, transferred to the university and played varsity football as a safety.

“SUNY Cortland is deeply appreciative of this most generous gift from the Grady family,” said SUNY Cortland President Erik J. Bitterbaum. “This is a permanent monument to the memory of the late Jim Grady and I hope that the deep meaning of this gesture for his family and friends is not lost on others. Jim's contributions to the world as an educator, coach, veteran, husband and father should be remembered each time our student-athletes step onto Grady Field.”

The gift will also establish the Christopher J. Grady ’79 Scholarship and the Terry Bedell Grady ’80 Scholarship, which are named after Chris and his wife.

Chris said he chose to give back to SUNY Cortland not only because of his family’s history, but because he views it as a place that gave him experiences that shaped his future. It's a life that’s so far led him to success in the insurance industry, culminating in his current position as senior vice president of sales at Athene Annuity & Life Assurance Company. It’s a company he helped to start.

“As I got involved in the college, I ended up doing many things,” Chris said. “I tried out for the football team, ended up playing lacrosse, joined Beta Phi Epsilon, became president of Beta Phi Epsilon, was Men’s Athletic Association president, student athletic director, manager of Roger Robinson’s varsity football team, scorekeeper for basketball, a member of school senate. I was all over the place with a lot of cool experiences.”

Embracing those opportunities taught him a lot about life, helped develop his negotiation skills and encouraged him to look beyond his major in physical education for job opportunities, Chris said. It's also part of the idea behind the new scholarships. He hopes they help students to discover skillsets they weren't aware they had.

“I’d like to give kids an opportunity and help them through their college experience,” Chris said. “I was broke in college. You can’t imagine how broke I was in college. Any dollar I could have gotten would have been helpful. So I just want to ease their burden.”