From SUNY Cortland to the Smithsonian 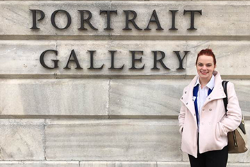 
Last spring, when it came time for SUNY Cortland history major Claire Leggett to start thinking about summer work, she applied to some of the nation’s most competitive internships at some of the world’s most famous showplaces: The Metropolitan Museum of Art and the Guggenheim Museum in New York City, the Albright-Knox Art Gallery in Buffalo and several Smithsonian locations in Washington, D.C.

Her shoot-for-the-stars approach caused Leggett’s biggest inspiration and supporter — her mom — to pause.

“I think she was nervous that I didn’t have a back-up plan,” said Leggett, a senior who grew up in East Aurora, N.Y. “I just knew that I wanted to go for it.”

Ultimately, that leap of faith paid off in the form of an 11-week internship at the Smithsonian National Portrait Gallery. Leggett described her Washington, D.C. experience as life-changing — the latest pivot in a remarkable undergraduate career that started with teaching aspirations and will end with impressive graduate school options for art administration.

For Leggett, a deep appreciation for artwork and museums runs in her blood. Her mother Barbara served as the longtime executive director of Explore & More Children’s Museum in Buffalo.

Growing up, family vacations were highlighted by museum visits. Leggett still can recall the burst of emotion she felt as a high school sophomore visiting the Prado Museum in Madrid for the first time, when she viewed Francisco Goya’s “The Third of May 1808” in person after seeing photos and learning about it in school.

Once at SUNY Cortland, it didn’t take her long to make a name for herself. Award-winning and insightful research served as her ticket to conferences across the country, from New Orleans to North Carolina. Her most recent work, “From Ballerinas to Murderers: How Physiognomy and Phrenology Impacted Art from 1800 to Present,” studies how artists used the two pseudosciences to depict racial and classist stereotypes in their artwork.

Her success across four years at the College was due in large part to an open-minded attitude and a tireless work ethic, regardless of the pursuit.

“I couldn’t have picked a better school for undergrad,” said Leggett, who was accepted into every graduate program to which she applied: American, Boston, George Mason, Georgetown and Northeastern universities as well as the School of the Art Institute of Chicago. “I didn’t want to go somewhere where a professor couldn’t be bothered to know my name.

“Really, being (at SUNY Cortland) and working one on one consistently with professors is what changed everything.”

That doesn’t mean the rewards came without contemplation.

From the time she was a teenager, Leggett laid out a straightforward plan in her head: go to college and enjoy a career as a middle or high school social studies teacher. She liked Cortland’s size and reputation in teacher education. But in her first year at the College, she took HIS 290: Historical Methods with Professor Gigi Peterson and saw even more opportunity in the discipline.

“Everything changed for me,” said Leggett, whose research for that class focused on the racial integration of Buffalo’s public schools. “It really made me think about everything I could do with history.”

Peterson described Leggett as a poster child for the type of work a history major can do outside of teaching and, more importantly, explaining why exposure to the liberal arts is crucial to the college experience. By the time she graduates in May, Leggett will have completed minors in anthropology, art history and political science — a strong yet unique foundation that supports her passion.

“Claire’s path is an excellent example of why students need flexibility in their schedules, especially in their earlier years,” said Peterson, who traveled with Leggett to the 2016 NCUR event in Asheville, N.C. “She made a pretty remarkable switch, and it was because of her energy, her intellectual curiosity and her willingness to take advantage of everything our campus has to offer.”

Leggett’s junior and senior years brought a series of those valuable experiences, each building on the one before it.

She was among the first three SUNY Cortland students to pursue an internship in public history as a junior. That program, under the direction of Assistant Professor Evan Faulkenbury, introduces history students to an applicable side of the discipline that relies on community engagement. Classmates worked at the 1890 House and the Cortland Rural Cemetery. Fittingly, Leggett offered her talents and love for the arts to the nearby Cortland Repertory Theatre.

That internship was the catalyst for her summer at the Smithsonian National Portrait Gallery, which eventually revealed a future in art administration. Leggett also worked at the Museum of the Earth in Ithaca this past fall. By coincidence, she discovered that one of her supervisors there once worked with her mother at the children’s museum in Buffalo.

“It was another one of those reminders that I was in the right place at the right time,” Leggett said.

She often thinks back to the summer between her sophomore and junior years, when she served as an orientation assistant entrusted to help incoming students transition to SUNY Cortland. Undecided futures and changing majors were among their most common fears. Leggett herself was in the process of shifting her own plans, from teaching to an unknown application of history.

“I told them: ‘Look, I’m right there with you. I changed my mind about my major, and you’re allowed to do that,’” Leggett said. “They were thankful that they weren’t alone, and so was I.”

She maintains that a major constant along her path to self-discovery has been supportive faculty members across several departments at the College. They include Peterson, Professor Girish Bhat and Associate Professor Kevin Sheets in history; Professor Kathryn Kramer and Lecturer Allison DeDominick in art and art history; and Professor Sharon Steadman in sociology/anthropology.

“I noted in one of Claire’s letters of recommendation for graduate school that I’ve been teaching at the college level for longer than she’s been alive, and I’ve had the chance to work with some outstanding students,” Peterson said. “She certainly stands out within that small group at the top.”

Leggett was reminded of that support in early February, on her birthday. She was awaiting word on her application to Boston University, one of her top graduate school choices, but she wasn’t carrying her laptop to classes. So she stopped in the History Department’s office area in Old Main to check her email.

When she read the good news on the computer screen, Leggett broke down in tears. Several faculty members ran out of their offices to be among the first people to hug and congratulate her.

“They were all so excited for me, like my success was their success,” she said. “That’s just a great environment to be in.”