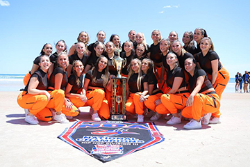 But in the end, the student-led, hip hop dance team came out on top at the sport’s biggest event.

Their trophy was one of 45 awarded across different divisions and performance categories in cheerleading and dance. The university’s cheerleading team also finished with a top-five finish in the event’s Advanced All-Female Division III category.

In total, the four-day championship drew 20,000 spectators and 355 collegiate teams. That group included Navarro College, the Texas community college featured in the popular Netflix series “Cheer,” which earned the cheerleading title in its junior college division.

“It was the trip of a lifetime,” said Brianna Del Duca, one of two senior co-captains of the 29-person team, along with Jenna Mangogna. “Just the atmosphere there, it was like we were at Disneyland for cheerleaders and dancers.”

After submitting an audition video in November, Danceworks was among five teams selected from across the country in their competition category. Those five teams competed in a preliminary round April 8, with the top three scores advancing to the finals.

Danceworks finished third in the preliminary round Friday night, securing the last spot in Saturday morning’s finals with their performance to a remix version of Cardi B’s “I Like It.”

Del Duca said the team was thrilled just to receive an initial invitation to Daytona Beach. Earning a spot in the finals produced even more elation. And when the Danceworks captains were provided the judges’ feedback after the preliminary round, their focus shifted to an even bigger prize.

“After we read through all of the critiques, Jenna and I looked at each other and thought, ‘Let’s try to win this thing,’” Del Duca said. “We said, ‘Let’s take what they said and fix it.’ At least we could say we did everything that we could.”

The Danceworks team held an impromptu, late-night practice in the team’s hotel parking lot. One judge recommended that the dancers adjust their spacing after the preliminary round performance, so team members marked the parking lot with tape in an effort to replicate the set-up of the Bandshell, the iconic stage where the finals take place.

They held a three-hour practice — from 10 p.m. to 1 a.m. — to perfect their dance routine the night before Saturday morning’s finals.

Del Duca said that type of effort is common for the team, which holds two-hour practices during the semester up to six times each week in Park Center’s dance studio. Del Duca and Mangogna, who both grew up in Staten Island, N.Y., are best friends and housemates, and they’ll often stay up late at night creating new hip hop dance routines.

Saturday morning’s performance marked their crowning achievement. Teams were limited to 20 members on stage, so the rest of the squad cheered from the front row. Dressed in bold orange pants and black shirts, the group seemed to move perfectly in sync during its two-minute arrangement.

Danceworks teammates cried tears of joy and embraced each other immediately, but they had to wait through 15 more hip hop performances before learning the results. Their score jumped from an 87 in the preliminary round to a 92 in the finals — and the judges noted their improvement from the initial routine.

Del Duca and Mangogna earned an additional award for innovative choreography. Several dancers and spectators also praised Danceworks for their accomplishments as a student-led team.

“Everyone was fascinated when we were there,” Del Duca said. “They kept asking, ‘You don’t have a coach or an advisor?’”

Danceworks is one of six performance-based sport clubs at SUNY Cortland. Others include:

Danceworks, which was established in 1999, is student-run like all of SUNY Cortland’s 34 sport clubs, six of which are performance based.

The time commitment required for a student-run club was worth it for Del Duca, a childhood/early childhood education major, and Mangogna, a physical education major. Both have been dancing since they were 5 years old and both seniors hope to continue teaching the sport in the future.

Del Duca said the trip to nationals was the perfect capstone for their Cortland experience, which included highs like performing at MetLife Stadium for the 2019 Cortaca Jug game and challenges like practicing with physical distancing requirements during the COVID-19 pandemic.

Last spring, with most dance competitions canceled, the team’s highlight was recording a routine on the SUNY Cortland Stadium Complex turf without spectators. This spring, Danceworks teammates celebrated in the waters of Daytona Beach with their trophy — a tradition for national champions in cheer and dance.

“We wanted to do something big this year because we’ve worked so hard,” Del Duca said. “It’s every dancer’s dream to go to nationals, so we were grateful just to have the opportunity.

“The feeling of bringing that trophy home to Cortland, that was incredible too.”