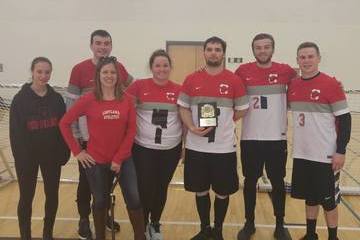 
SUNY Cortland is national champion in a challenging sport that few people have ever heard of. In fact, the College’s two winning goalball teams are so proficient that they can beat opponents with their eyes closed.

Actually, the rules require that they do it that way.

“One of the main goals that these goalball clubs have, their purpose is to potentially make it an NCAA sport so that kids who are blind and vision impaired have something to do coming out of high school,” said Brandohn Gabbert, an exercise science major who grew up playing goalball. “Right now, we’re not getting scholarships for these kinds of sports. We can play high school goalball, or even start in middle school, but once you get to college, there’s nothing for you on the collegiate level.”

The University of California, Berkley started the nation’s first competitive collegiate goalball team in 2015, followed by a handful of other colleges, including SUNY Cortland in 2017. The sport, in which players try to throw or roll a ball with bells inside into the opposing team’s goal, has proven popular among SUNY Cortland students, especially those interested in adapted physical education.

On April 21 and 22, a pair of SUNY Cortland goalball teams travelled to Towson (Md.) University to compete in the fourth annual Collegiate Goalball National Championships. SUNY Cortland didn’t just win the national title, it sent two teams and took each of the top two spots.

Gabbert, a non-traditional student who competed in goalball nationally before coming to SUNY Cortland in 2016, didn’t expect to continue his athletic career in college.  Although he missed making diving saves, spinning throws and working together with his teammates, the senior from Manhattan, N.Y., wanted to dedicate himself to his studies and prepare for a career in chiropractic care.

But when Gabbert heard from friends at other colleges who were organizing teams, he decided he had to get the ball rolling — literally — at SUNY Cortland.

With the help of advisor Cathy MacDonald, associate professor of physical education, Gabbert formed the team in the spring of 2017.

Although the team is wildly successful, winning was never the ultimate goal. Gabbert said he’ll always have a national championship on his resume, but what he really wants is to raise awareness of inclusive sports for the visually impaired and ensure equal opportunities for the next generation of blind athletes.

Goalball was created in 1946 for visually-impaired veterans who wanted to rehab from other injuries or remain physically fit. In the decades since, goalball has evolved into a competitive sport that is played around the world from recreational levels to sanctioned World Championships and the Summer Paralympic Games.

The game is played on a volleyball court with two opposing teams of three players each. Thick twine or thin cables are taped to the floor so that players also have a tactile way of determining their position. Players wear blacked-out goggles to ensure that no one has a vision advantage.

Teams alternate throwing the ball at the opponent’s end, attempting to beat the defenders and score a goal. Defenders locate the ball by listening for the bells, and talking with teammates. As a result, spectators at goalball games must remain silent throughout the competition.

A complete list of rules and regulations is available from the International Blind Sports Federation.

Gabbert has competed at a national level for eight years. Many of his SUNY Cortland teammates and fellow national champions, on the other hand, have only recently been introduced to the sport. A number of MacDonald’s adapted physical education students picked up the game and learned from Gabbert’s advice, particularly on how to interact verbally as they tried to save shots.

“If we didn’t have him to help us out, we would have been lost,” said Kyle Gerken, a senior physical education major from Hauppauge, N.Y. “The practices definitely helped out to teach us strategies and work together. Working with the blindfold, we would not have known to communicate.”

Dylan Savarese, a junior physical education major from New Hyde Park, N.Y., is excited to keep the team going when he returns in the fall. SUNY Brockport is planning an upcoming tournament, and he wants to demonstrate that SUNY Cortland’s showing at the national championships was no fluke.

“We were thrown into it without much experience. Or padding,” said Savarese. “It was the will to win, really.”

Elizabeth Byrnes, a senior physical education major from Queens, N.Y., is trying to encourage her younger classmates to keep SUNY Cortland’s goalball tradition alive in the years to come. Cortland placed third in the national tournament in 2017, its first.

“Personally, everyone I talk to, I try to tell them about it so it can grow,” she said. “Without (Gabbert) preaching to people, unfortunately it won’t survive. I’m trying to get the underclassmen and other people to find out about it.”

There are hopes, too, that goalball can become part of SUNY Cortland’s adapted physical education community programs. Currently, the College offers wheelchair sports on Thursday evenings and a gym-and-swim program for local children and young adults with disabilities.

“We’ve been at the forefront for a long time,” said John Foley, professor and chair of the Physical Education Department, of the College’s commitment to adapted activity. “Sometimes we’re just now recognizing all the things we do. We do wheelchair basketball on Thursday nights. Occasionally we’ll do sled hockey. There is so much that we’ve done over the years.”

As for Gabbert, his days of competitive goalball likely come to an end following Commencement. He wants to focus on his career in the coming years rather than go through the grind of trying to compete for a spot on the U.S. Paralympic team.

That doesn’t mean he won’t stop in his role as an advocate for athletic opportunities for visually impaired athletes. SUNY Cortland, he believes, could be just the place for such a transformation in college athletics.

And a national championship doesn’t hurt, either.

“If it ever does become an NCAA sport, Cortland could be one of the schools that’s on the map as one of the founding schools,” Gabbert said. “We’re one of the 12 or so that started it before it became a national thing. Hopefully it continues on to next semester and next year.

“We want other kids to know coming from high school, Cortland has this thing you can do. You can have your major and have something fun to do so it’s not just class, dorm, class, dorm. You can do something and be active.”

MacDonald offered an independent study class to help students learn about the sport. Students who are interested in participating in goalball this fall should contact MacDonald or Gabbert.