P.E. students step up to cerebral palsy cause 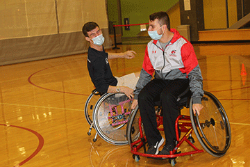 
SUNY Cortland physical education majors often can be found rolling around in wheelchairs in a Student Life Center gym, playing a pickup basketball game and learning to interact with their friends and classmates who have different abilities.

Last month, more than 100 of these and other majors took it a bit further, stepping up to find a cure or treatment for people who live with cerebral palsy.

The national organization raises funds for early detection and intervention of cerebral palsy for a chance of a better outcome; technology that will help people with the disorder, including communication technology; research on genetics; and research on the effects and management of chronic pain.

In this national drive, Steptember participants count their daily steps. The more steps they tally, the more generous the gifts of the donors they have rallied to support research. The research helps people who live with this often devastating group of prenatal developmental disorders, which affect movement and muscle tone or posture.

Among the 128 total donors at SUNY Cortland, several milestones were achieved:

“I would attribute the success just to the dedication of everyone that participated,” said Matthew Milano, a senior physical education major from Miller Place, N.Y., who serves as adaptive P.E. representative to APEM’s executive board. Milano coordinated Cortland’s campus-wide appeal for the national foundation.

The campaign allows students who don’t have the means to donate much the ability to use social media to raise money from others.

“People who were posting on their social media pages really became one with the cause,” said Milano. “They really understand why we need to raise awareness about cerebral palsy and did a fantastic job. Raising money is nice, but raising awareness is really important because it goes so far.”

APEM at SUNY Cortland promotes physical education as a vital discipline paramount to the total development of healthy individuals. APEM members who take part in community service, fundraisers or activities of that nature improve their chance to be selected to go to a state or national conference.

Milano said he was most impressed with the $8,045 the club raised because members did not start on Sept. 1, as promoted by the national organization, which had set its goal to raise significant funds by Oct. 6 to mark World Cerebral Palsy Day.

“We started maybe on Sept. 8 or 9 so it was three weeks instead of four,” said Milano.

A week into the campaign, MacDonald and five department colleagues had set up Steptember webpages with each recruiting their own donors.

Once he learned of the need, Milano created his own Steptember page on the CPARF site and also worked diligently to encourage classmates to do so as well.

Soon 29 students — both inside and outside professional studies and the Physical Education Department — were marching to his beat by setting up their own Steptember fundraising pages on the CPARF website and pushing the cause out to classmates, family and friends, often through social media.

Milano was first introduced to people with special needs while a student at SUNY Cortland.

“One of my friends whom I’ve made here at SUNY Cortland was diagnosed with cerebral palsy,” Milano said of Logan Knowles, a junior biomedical sciences major from Horseheads, N.Y., who happens to be spotlighted for his athleticism and advocacy efforts as a Campus Champion in the Oct. 26 Bulletin. “He’s a Para-athlete and he’s just an overall great person.

“Seeing that sometimes he’s marginalized — like people for lack of better words just don’t give him the time of day because of the way he looks — has stuck with me,” Milano said. “And it makes me think that something has to change. And education and fundraising is probably the best way to do that and spread the word, not just about cerebral palsy but disabilities in general.

“Another instance is one of my professors has cerebral palsy as well, and is one of the most hardworking and extremely intelligent professors,” Milano said.

“I joined the 4-plus-1 program before I got involved with adaptive P.E.,” Milano noted. “So something I’ve looked at is potentially going for a second master’s degree, in adaptive P.E.," he said. "Because working with people with disabilities has definitely touched me.”