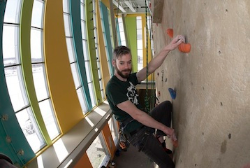 
After five frustrating hours of helplessly peering down a foot-wide rock crevice at the barely visible back of a dog wedged headfirst far below, rescue crews were getting desperate.

Since the female Doberman pinscher had broken through snow masking the crack at Clark Reservation State Park near Syracuse, N.Y., she had fallen lower and wedged herself tighter, despite the best efforts of area firefighters. It was getting close to midnight, the freezing rain was getting colder and the dog was showing fewer signs of life.

So they called a SUNY Cortland student.

Nate Farrington, an outdoor recreation major, received the call from an acquaintance who worked at the Veterinary Medical Center in Syracuse. She had recalled that he liked to go vertical caving - an activity in which people use ropes to explore deep holes in the earth - and asked if he could help.

“As a kid, I was always climbing trees, climbing buildings, climbing my house and jumping off the roof with a trash bag designed to be a parachute,” said Farrington, who moved on to mountains, caves and indoor climbing facilities. He is now the student manager of the 42-foot-tall climbing wall in SUNY Cortland’s new Student Life Center.

Farrington didn’t know what he’d need for the dog rescue, so he just threw whatever he had in a car and raced to Clark Reservation. Farrington, a commuting student who drives an hour to class every day from Baldwinsville, N.Y., lives about 20 miles from the entrance to the park. He was met there by a snowmobile and taken to the site.

“They asked me what I was going to do, and I told them I was going in there after her,” said Farrington. The rescuers gathered around the dark gap, which was about as wide across as the length of a man’s shoe, looked at him skeptically. “It was narrow. I had to keep my face to the side, I couldn’t even turn my head,” Farrington recalled. “Through caving, we’d done enough squeezes where that kind of situation doesn’t really bother me. That switch in my head doesn’t go off.”

Farrington initially anchored a rope to a nearby tree and used standard safety precautions to begin his descent into the 20-foot-deep crevice. But his harness and other equipment got in the way, so he decided to go down without them. He figured that that in a space that cramped, it would be easy for him to stop himself if he started to slip.

“I could barely see her, and they had a light on her,” Farrington said. “A lot of snow and dirt had fallen on top of her, and she’d wedged herself in where several rocks were in the way. They had to point her out to me several times. Every once in a while she’d make a little noise and it would give all of us a glimmer of hope.”

Eventually, Farrington found an angle that gave him some access to the dog, whose name is Remy. Firefighters reached down with the catchpoles used by animal control officers and Farrington was able to get one looped around Remy’s neck and one around the 50-pound animal’s leg. With him pushing and the other rescuers pulling, the dog began to rise from the hole.

But by then, two hours after he’d arrived, and more than seven since the dog had fallen, Farrington feared they were too late.

“I had a really bad vibe,” Farrington recalled. “Her eyes rolled back in her head and she went slack. I used to work at the emergency vet’s and I’ve always been around dogs, so I’ve got a good sense of them. I really didn’t think Remy was going to make it.”

As soon as she reached the top, rescuers loaded her onto a snowmobile and whisked her off to the veterinarian. It took Farrington a bit longer to inch has way back up. It was about 2 a.m. and Farrington was exhausted, but instead of heading home he went to the Veterinary Medical Center of CNY in Syracuse to check on Remy.

He was happily surprised to find her standing and walking around. Remy was released from the hospital the next day.

Farrington, 32, had worked at that same 24-hour emergency veterinary center several years ago, when he thought of becoming an animal doctor. He also studied film, writing and social work, earning an associate’s degree from Onondaga Community College and attending both SUNY Purchase and SUNY Oswego. He fixed cars and motorcycles and was a key staff member at the Westcott Community Center in Syracuse.

While at the center, he started an outdoor adventure program for children that included climbing and ropes. He ran it successfully for seven years and continues to still.

The experience helped him realize what he wanted to do with his life. It’s why, at the age of 32, he’s finishing his undergraduate degree at SUNY Cortland and focused on entering its outdoor recreation master’s program.

“All of the college majors I had - film, English, social work - I thought were really cool, but I kept wanting to do them outside. I wanted to be outside. Then I looked into SUNY Cortland and found out I could get a degree in it. I could major in outside!”