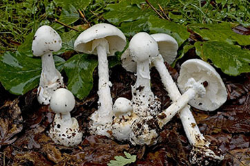 
Shortly before fall break, a man from Rome, N.Y. was hospitalized with symptoms that suggested he had eaten something very, very toxic.

Poison experts weren’t sure about the cause until they consulted SUNY Cortland Distinguished Professor of Biological Sciences Timothy J. Baroni.

Baroni’s diagnosis – based on the patient’s symptoms and confirmed by digital images – was almost immediate: The man was being killed by a Destroying Angel.

That’s the common name for Amanita virosa, one of the most toxic mushrooms known to humankind.

Baroni, one of the nation’s leading mycologists, verified the mushroom’s identity with a microscope after a sample was overnighted to him.

If someone ingests a Destroying Angel and doesn’t receive prompt treatment, there’s a 50 percent chance they’ll be dead within a week. If they are lucky, they might just lose a kidney or experience liver failure.

But, thanks to Baroni’s quick suggestion to start pumping the correct antidote into the patient, he was discharged from Strong Memorial Hospital in Rochester, N.Y. and fully recovered a week after accidentally eating the poisonous mushroom.

Life-saving advice is an unexpected benefit of an expertise on fungi that Baroni, 2009 recipient of the Mycological Society of America’s highest honor, has gained over three and a half decades of field work and study. He has traveled throughout the United States, the Caribbean and much of Central America collecting and cataloging mushrooms and other fungi, sometimes discovering new species.

The samples of Amanita virosa sent to him along with a variety of other mushrooms collected by the poisoned patient from his own front yard are now the newest specimens of SUNY Cortland’s extensive fungus collection.

An estimated 12,000 varieties of the world’s roughly 100,000 known species of non-plant fungi are housed in rows of storage cabinets in Bowers Hall on the SUNY Cortland campus. Most of them were collected by Baroni and his student research assistants.

Baroni has also been successful in helping to raise more than $1 million in grants from the National Science Foundation to enable SUNY Cortland to collect, maintain and share its world-class fungal and plant collections. Most recently, he was awarded $30,000 to digitize SUNY Cortland’s fungi and share the images as part of a global database known as the Mycology Collections Data Portal.

About 90 percent of all mushrooms are edible, Baroni said. Of the remaining 10 percent, about half are toxic.

“Because there are so few that are toxic, anyone can become an expert. Learn the ones that will kill you. Common sense and knowledge are very important.”