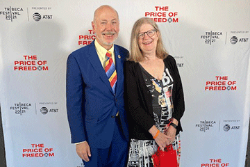 
SUNY Cortland political scientist and author Robert Spitzer will share his thoughts on the politics of gun control with a wider audience when CNN screens the documentary film in which Spitzer appears, “The Price of Freedom,” on Sunday, Sept. 19.

The CNN broadcast will premiere from 9 p.m. to 11 p.m. EDT (6 p.m. PDT) without commercial interruption.

CNN recently acquired the rights from Flatbush Pictures and Tribeca Films to broadcast the film, which held its world premiere in early June during the Tribeca Film Festival.

Directed by Emmy award winning American filmmaker Judd Milo Ehrlich, “The Price of Freedom” takes a fresh look at America’s gun history and the contemporary gun controversy from multiple perspectives, including a deep dive into the pivotal role of the National Rifle Association (NRA). A review appears in Variety magazine.

Spitzer never hesitates to give his opinion on the legislative hot potato of passing more laws to curb gun violence in the U.S., even when he's deep in upstate New York’s hunting and gun-appreciating heartland.

Spitzer, whose national claim to fame originated with his seminal 1995 book aptly named The Politics of Gun Control, now in its 8th edition, vividly recalls one of many community speaking engagements, this time in 2013 at Jefferson Community College in Watertown, N.Y.

“The faculty member who introduced me, lovely guy, did the customary ‘Robert Spitzer blah blah blah’ and when he finished, he said, ‘Please welcome Robert Spitzer,’” said Spitzer, a SUNY Distinguished Service Professor and SUNY Cortland professor of political science.

“And nobody applauded. They sat there like stones. You know, they didn’t know me and they were skeptical. It was a perfectly good talk and we had good back and forth. But they were somewhat hostile. But it was fine.”

Spitzer also doesn’t pull his punches about America's deadly gun culture in the commentary that appears in a new feature-length documentary, “The Price of Freedom,” which had its world premiere on June 16 at the Tribeca Film Festival in New York City.

The film opened on July 6 in 350 theaters nationwide, including screens in Ithaca, N.Y., and Syracuse, N.Y.

Spitzer, who pioneered academia’s study of the legal underpinnings of American firearms ownership more than 30 years ago, said he didn’t prepare in any way for the three-and-a-half-hour video interview with Ehrlich last November from a rented Syracuse apartment/studio. He also attended the premiere screening at the Tribeca Film Festival at Hudson Yards Public Square and Gardens and the reception afterward.

It’s his third documentary film appearance. He was interviewed for the 2003 PBS film “Guns and Mothers” and for the 2016 Katie Couric Film Company documentary, “Under the Gun,” which aired and is available on Epix.

“I didn’t do any particular prep because I write and speak on this stuff  all the time, frankly,” Spitzer said. “For me, you insert your quarter, and you get a full play. And I gave them the full play. I spent a lot of time talking about the history of gun laws in America. And I’m glad to say that they really punch that point early on in the film: that gun ownership is as old as America but so are gun laws.”

He said the message comes across even in the snippet of Spitzer’s voice that can be heard in the two-minute film trailer.

“I mean as soon as Europeans landed on continental U.S., in the early 1600s, they had guns, but they were also enacting gun laws,” Spitzer said. “The history for 300 years was thousands of gun laws of every imaginable variety. So the idea that gun regulation is new is not true. It’s only been in these last few decades that it’s been this supercharged, political lightening rod.”

During his remote interview with Ehrlich, Spitzer also discussed other topics, including the Trump administration on gun policy, and the 2020 Election.

“He’s an interesting guy, too,” Spitzer said of filmmaker Ehrlich, whose prior documentary films include the 2016 “Keepers of the Game,” about a women’s lacrosse team at Salmon River High in Fort Covington, N.Y., and the 2014 “We Could Be King,” about high school former football super rival teams that join forces after one school is closed.

The director had also interviewed other legal scholars, families of gun victims and gun violence survivors, and a former president of the National Rifle Association.

“He actually was an important voice in the film,” Spitzer said about the former NRA spokesman, David Keene. “He was not a hysterical gun guy and he defended the NRA position and explained it.

“The NRA of course comes in for heavy criticism in this film and I’m not responsible for the editorial slant in the film. I was more than happy to contribute information about what I do. But the film did include him and I thought he acquitted himself well and made his case clearly, calmly and coherently.”

Although the basic message of “The Price of Freedom” isn’t new, “they came up with film footage that hadn’t been seen in decades,” he said.

“And some of the detailed information about our gun law history hasn’t been brought to light before. So I think they really succeeded in bringing in new information to this debate that hasn’t been excavated before.”

Spitzer has gone from being the lone political scientist exploring this subject to sharing the stage with other Second Amendment scholars and criminology specialists.

“I would say a growing number of people, in many fields including political science, are involved in what’s called gun studies,” he said. “When there aren’t others researching a given subject, it’s kind of an open field and that’s what it’s been for me.”

Spitzer explained why he agreed to appear in the film.

“It’s an opportunity to participate in the public dialogue about an important issue where your academic research has something useful to say about that public debate,” he said.